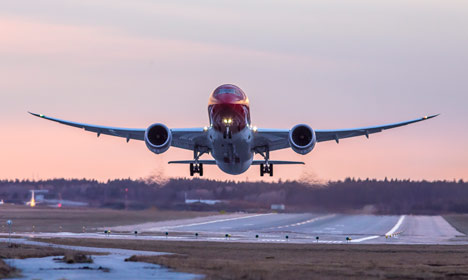 Norwegian is negotiating seven new routes out of Copenhagen. Photo: Norwegian
Norwegian CEO Bjørn Kjos told Berlingske Business that the budget airline is expanding its operations in Copenhagen and hopes to introduce a total of seven new long-distance routes out of the Danish capital soon.
“We are planning many new long-distance routes to Copenhagen so we are entering an exciting future in Denmark,” Kjos said.
The airline boss said that Norwegian is looking to add routes between the Danish capital and São Paulo, Rio de Janeiro, Buenos Aires, Delhi, Mumbai, Cape Town and Durban.
“We are currently negotiating with the two South African cities and those in India, so they will likely be the first ones. Brazil and Argentina will come after that, but it all depends on where we get flight permission first,” he said.
While Norwegian couldn’t promise a concrete date for its new Copenhagen routes, rival airline SAS on Thursday said that it would open a new daily route to Boston, which the company CEO said has long been in demand among Danish business travellers.
“Boston has long been high on our wish list of nonstop destinations and we are therefore delighted to start selling tickets for this direct daily service from Copenhagen,” Rickard Gustafson said.
“The new SAS route to Boston provides daily flights between two key metropolises, benefiting both Scandinavian and North American travellers, and the strong US dollar may make even more Americans want to go to Denmark, which would benefit the entire Danish economy,” Thomas Woldbye, the CEO of Copenhagen Airports A/S, said.
To begin with, the Boston route will use a Boeing 737 catering primarily to business class travellers but SAS said that it would upgrade to a larger plane if the route catches on. The Boston route will depart Copenhagen every day at 12.50pm and arrive again at 7am.
Berlingske Business reported that SAS also added new routes to Krakow, Reykjavik and Vienna in March.