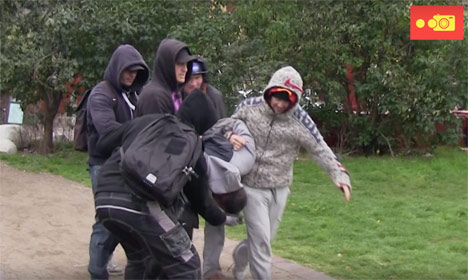 The incident occurred in a Tuesday morning police action in Christiania. Screenshot: Cadok/YouTube
A video released by Cadok, a documentary film group based in the alternative enclave of Christiania, shows four plainclothes police officers carrying a man who then appears to be pepper-sprayed in the face by a fifth officer.
In a post to Facebook, Cadok said that the incident happened shortly after Christiania’s illegal cannabis stalls opened for business on Tuesday morning.
“A cannabis stall opens at 9am in the morning and a group is standing in line to buy cannabis. A witness describes: Suddenly four plainclothes officers, who were standing in line, threw themselves at a man who was not resisting. A fifth agent came and punched the arrestee in the face many times with a clenched fist while the man was detained by the other officers,” the documentary group wrote on Facebook and YouTube when it released the video.
“The man is assumed to have been beaten unconscious. On the way out, the same man was given a shot of pepper spray,” the description continued.
In the video, the man in question is one of several being led out of Christiania in police custody. He does not appear to be unconscious and looks to be struggling to get out of the officers’ grip. Officers can be heard telling him to remain still. The video then shows another officer run up and appear to use pepper spray.

Embed not working? View on YouTube
“Police have pepper spray to defend themselves with but here it is being used as punishment. Is that legal?” Cadok wrote.
Copenhagen Police confirmed the use of pepper spray and said it would ask the Independent Police Complaints Authority (Den Uafhængige Politiklagemyndighed) to review the case.
“We confirm that there was an action at Pusher Street in which pepper spray was used and arrests were made. It is difficult to precisely evaluate what is happening in the pictures. Therefore Copenhagen Police will take the case to the Independent Police Complaints Authority, which can clarify if any offence occurred,” the police said in a statement to TV2.
The sale of cannabis is illegal in Denmark, but an open-air market flourishes in Christiania's Pusher Street, a small area within the largely self-governed former hippie commune in the heart of Copenhagen. The cannabis business in the self-proclaimed ‘freetown’ has been estimated to be worth one billion kroner ($152 million) annually.
Police regularly carry out raids in Christiania although the impact on cannabis sales within Christiania is arguable and critics of the police tactics argue that the raids have resulted in spreading the cannabis sale to other parts of Copenhagen.
Earlier this year, a combined 76 people were sentenced to a total of 187 years and three months in prison for selling cannabis in Christiania as a result of a massive March 2014 police raid in which officers ransacked 150 locations in Christiania and elsewhere in Copenhagen.
In mid-September, a raid resulted in an additional 29 arrests including the arrest of a man allegedly behind an operation that delivered nearly 200,000 joints to Christiania.