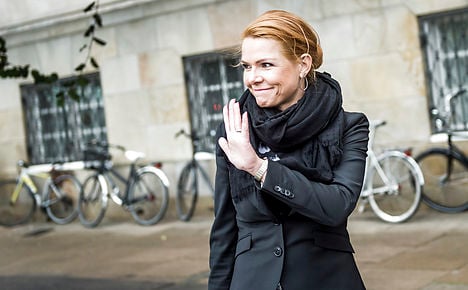 Integration Minister Inger Støjberg is going to have a busy year. Photo: Thomas Lekfeldt/Scanpix
The Venstre government’s law proposal package for the new parliamentary season includes 17 suggested changes from the Ministry for Immigration, Integration and Housing. Only two ministries – the Tax Ministry and the Justice Ministry – have more proposals included in the package.
Among the proposed changes within the area of immigration are:
– New, more difficult citizenship requirements approved by the government earlier this week.
– New family reunification rules that will include tougher restrictions for “foreigners who have poorer preconditions for becoming integrated into Danish society” and easier rules for “foreigners who are consider to be suitable for integration”.
– Tighter rules for obtaining permanent residency that will require foreigners to “meet a string of fixed conditions and some supplementary integration-relevant criteria” in order to obtain permanent residency. Additionally, the proposal calls for scrapping the “particularly easy access” to permanent residency for refugees.
– Tougher citizenship criteria for children who were born in Denmark to foreign parents. The proposal entails scrapping more lax requirements that were implemented by the previous government in 2014.
– More focus on a refugee's ability “to contribute” when Denmark chooses its 500 UN quota refugees each year. These changes were introduced by Integration Minister Inger Støjberg in August.
– A proposal to follow-up on suggestions from a committee that was established to improve the recruitment of foreign workers to Denmark.
– A proposal to apply the newly-created ‘integration benefit’, a sharp reduction in the benefits given to refugees, to even more foreigners.
– A proposal to implement recommendations from the Criminal Code Council (Straffelovrådet) to change Denmark’s current laws on treason so they can be applied to Danes or foreigners who engage in armed conflict abroad.
The entire law proposal package can be found here.