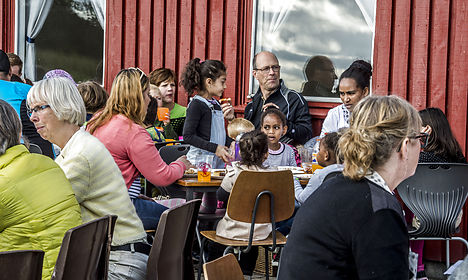 Danes and refugees mix at a Red Cross event in the Jutland town of Bjerringbro last month. Photo: Preben Madsen/Scanpix
A construction site that was destined to become home to 25 refugees was damaged by arson over the weekend.
Dragør Council is overseeing construction of the new refugee homes and said that its project was targeted by unknown perpetrators.
“We are currently establishing water, sewer and electrical connections to the pavilions. But there has been vandalism. Petrol was poured into the pipes and over the electrical installations and then set ablaze,” Dragør Mayor Eik Bidstrup told broadcaster DR.
The council has reported the incident to the police but at this point can’t say if the site was vandalized specifically because it will house refugees.
“If it is politically motivated, that is deeply troubling. The refugees are coming and we need to help them and take care of them. This will only affect taxpayers because it will end up costing extra money,” Bidstrup said.
Bidstrup said that there have been no previous reports of refugees being harassed in Dragør Council, which is located south of Copenhagen Airport on the island of Amager.
In August, a 26-year-old man was arrested for allegedly setting fire to an asylum centre minibus in Jutland and vandalizing its garage with a swastika and a message telling the centre that this was its “first warning”. Around 2,000 people from the local community later came out to support the centre’s residents.
While attacks on Danish refugee centres have been rare, the problem has been raging in Germany for months. Just this week, several fires were set in and around refugee homes in at least four separate German districts.
A map from Berliner Morgenpost tracked attacks on refugee housing in Germany between February and August:

A map of attacks on #refugee shelters in Germany. Staggering. http://t.co/qWhdAbA2FP pic.twitter.com/56oljpSFWX