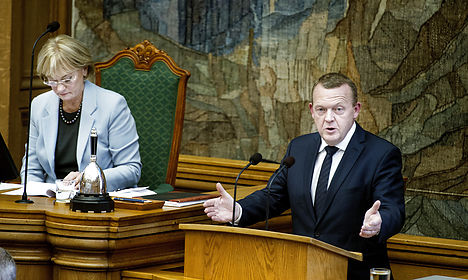 PM Lars Løkke Rasmussen delivered his opening address on Tuesday. At left is speaker of parliament Pia Kjærsgaard. Photo: Liselotte Sabroe/Scanpix
PM Lars Løkke Rasmussen used his opening address to guarantee that Denmark will never become a part of the EU’s joint asylum and immigration policies without the explicit consent of the people.
Denmark is holding a referendum on December 3rd in which Danes will be asked to change the nation’s opt-out on EU Justice and Home Affairs, which covers asylum and immigration, into an opt-in model. The referendum is largely meant to ensure Denmark’s continued participation in Europol and calls for the adoption of 22 specific pieces of EU legislation.
See also: Denmark to hold EU referendum in December
The referendum will have no effect Denmark’s opt-out on 28 other legislative acts, including 18 that fall under the EU’s asylum and immigration policies, an area that Rasmussen’s party Venstre and other right-of-centre parties said was a non-starter.
As part of the deal to put forth the referendum, Venstre secured the right to veto any future acceptance of European immigration and asylum policies, but the anti-immigration Danish People’s Party pointed to the PM’s decision to voluntarily take in an additional 1,000 refugees as a sign that he was now setting the stage for Denmark to eventually join EU asylum policies.
See also: Denmark to voluntarily take 1,000 EU refugees
A guarantee from the PM
In his opening address Tuesday, Rasmussen encouraged Danes to vote in favour of the referendum and stressed that the country will continue to “decide our immigration policies for ourselves” despite the “false picture that we are on a slippery slope” toward joining EU policies in the area.
“If a majority of parliament at some point wants Denmark to participate in a joint European asylum policy, my position is very clear: we will not give up our veto right without asking Danes via a new referendum. I can guarantee you that today,” he said.
Rasmussen’s guarantee comes as recent opinion polls show that resistance to the new EU ‘opt-in’ is growing amongst Danes.
Hearts warm and heads cold
The PM stressed that Denmark needed to keep its “heart warm and head cold” when it comes to the national reaction to Europe’s refugee crisis.
“Denmark has a responsibility to help people who are on the run. But we also have a responsibility to ensure that our country holds together,” he said.
“We need to speak openly about the fact that there is a difference between being a refugee and being an economic migrant. We can never cope with a mass migration that is borne upon the desire for a better life, regardless of how understandable that desire is,” the PM added.
Rasmussen also said that regardless of one’s opinion about the number of refugees Denmark accepts, “we need to be honest about the fact that new refugees will challenge integration”.
“Thus far, integration has failed. Of all the immigrants from non-Western countries, not even a half are employed. Even though many have been here for 10, 20 or 30 years. It is deeply worrying,” he said.
The PM’s full opening speech can be read here (in Danish).