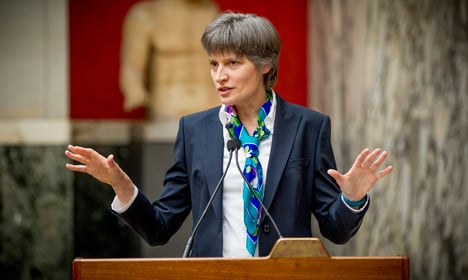 Lene Hau delivering the keynote address at the Elite Research Conference in Copenhagen in 2013. Photo: Elite Research Conference in Copenhagen in 2013. Photo: Lars E. Andreasen
Takaaki Kajita and Arthur B McDonald were jointly awarded the 2015 Nobel Prize in Physics on Tuesday “for the discovery of neutrino oscillations, which shows that neutrinos have mass”.
Among the other names that were rumoured for the presitigous award was that of Danish physicist Lene Hau. Although Hau didn't get her turn in the global spotlight with Tuesday's announcment, The Local Denmark thought she deserved some attention nonetheless. Here are ten things to know about a Dane many think is on the Nobel waiting list.
1. She stopped light
In 1999, Lene Hau and her colleages at Harvard University successfully slowed a beam of light down to around just 60 kilometres (37 miles) per hour. Two years later, she was able to actually stop a beam of light altogether, the first person to ever accomplish that feat. Since then, she has gone on to alter light even further.
”We can hold on to the light, move it around or even save it for later. We can actually manipulate it,” Hau told ScienceNordic after delivering the 2014 Hans Christian Andersen lecture at The University of Southern Denmark.
Hau explains her breakthrough in this video:
2. She used a new state of matter
Hau pulled off her amazing light accomplishment by using the Bose-Einstein Condensate (BEC), a state of matter that was first theorized in the 1920s by Albert Einstein and Satyendra Bose but wasn’t actually created until 1995. The BEC occurs at incredibly low temperatures approaching absolute zero (-273.15C). Hau’s team used the BEC to slow and eventually stop light.
3. A Nobel win would be historic
That Hau came up short on Tuesday might not qualify as a major surprise. The stats show that the best way to be a Nobel Prize Physics winner is to be a 55-year-old man. That's the age of the average laureate, who has only twice been a female scientist. Hau hits the average age right on the nose but (for now, at least) she will not join Marie Curie (1903) and Maria Goeppert Mayer (1963) as the only female recipients of the prize.

There has been talk that the various committees handing out the Nobel Prizes are this year trying to boost their gender equality credentials, but one of the experts behind the Medicine award told The Local on Monday that gender was “not a factor” in choosing a recipient.
4. She’s a product of Jutland but now firmly at home in Harvard
Hau was borin in Vejle in 1959 and did her early studies at the University of Aarhus. She received a Bachelor in Mathematics in 1984, a Masters in Physics in 1986 and her doctorate in 1991. Hau now lives in Boston and has tenure at Harvard, where she is Mallinckrodt Professor of Physics and Applied Physics and has also taught energy science.
5. Went abroad with help from Carlsberg
No, it wasn’t from drinking beer. The brewery awarded Hau a Carlsberg Foundation fellowship in 1988 that would allow her to study at the Rowland Institute of Science in Boston, which is now a part of Harvard University.
6. Attributes much of her success to Denmark
In a 1999 New York Times profile, Hau stressed that she “was lucky to be a Dane”.
“Denmark has a long scientific tradition that included the great Niels Bohr, one of the founders of quantum theory. In Denmark, physics is widely respected by laymen as well as scientists, and laymen contribute to physics. For instance, research in quantum mechanics has been supported in Denmark by the makers of Carlsberg beer since the 1920’s,” she told the Times.
7. She’s got a ‘wow’ factor
Advanced physics isn’t the most easily digestable area of study for laymen (as the layman writing this can attest) but Hau seems to have a way of striking a chord with non-nerds. In a glowing 2013 profile, Radiolab refers to Hau as a “master of the universe”, a “physicist who makes Zeus mythology a reality” and “one cool cat”.
8. She is multilingual
In addition to her native Danish and working language of English, Hau can also speak German and French. She told the Times that she “would have been lost” without French when she studied at the European Laboratory for Particle Physics near Geneva.
9. She’s an advocate for dual citizenship
Although the 55-year-old has been in the US for years she remains a Danish citizen. The group Danes Worldwide, which advocated for dual citizenship for years before it became a reality, pointed to Hau as a prime example of the need to change the rules.
“Professor Hau does not understand the Danish government’s arguments against dual citizenship. She is born and raised in Denmark and her culture and values will always be affected by that. She says she feels 100 percent Danish and 100 percent American. At the same time,” Danes Worldwide wrote in a 2011 appeal to parliament.
The group named Hau the ‘global Dane of the year’ (Årets Verdensdansker) in 2010.
10. Even without a Nobel, she's had many awards
In addition to the honour from Danes Worldwide, Hau has an honary appointment to the Royal Danish Academy of Sciences and Letters and is a member of the Royal Swedish Academy of Sciences, the American Association for the Advancement of the Sciences and the American Academy of Arts and Sciences.