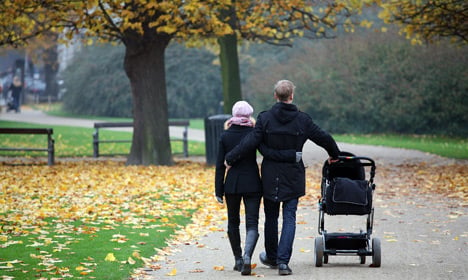 The average age for first-time parents in Copenhagen is well above the national average. Photo: Colourbox
As if sexy videos encouraging Danes to either ‘do it for mom’ or ‘do it for Denmark’ were not enough, the City of Copenhagen is now also hopping on board with its own push to get young people to have babies.
See also: Sexy new ad tells Danes to 'do it for mom!'
Copenhageners in long university educations now have their first child at an average age of 31.8 years, while the average for city residents as a whole is 31 years. To spur residents to get going on the baby front, the city has launched a campaign reminding Copenhageners that fertility won’t last forever.
One of the campaign materials features a picture of sperm cells with the text ‘Are they swimming too slowly?’ while another asks women if they’ve “counted their eggs today?”
The campaign also features a video in which a young, stressed couple named Jonas and Sofie are visited by a ghost of transgressions past who tells them that all of Jonas’s drinking and smoking, not to mention the chlamydia that Sofie picked up on holiday and her insistence that they finish their education first, are to blame for their problems conceiving.
The campaign has its roots in Denmark’s falling birth rates. The national fertility rate was at 1.69 in 2014, a small increase over 2013 and the first time that year-end numbers have been up since 2010.
See also: Danish fertility rate on the rebound
In 2014, the average age for becoming a first-time parent in Denmark was 29.1 years, a full five years older than in 1970, and up to ten percent of all children born in Denmark are now conceived only after fertility treatment. According to the fertility awareness organization Dansk Fertilitetsselskab, 20 percent of Danish men never become fathers while 12 percent of Danish woman either never have children or don’t have as many as they'd like.
Ninna Thomsen, Copenhagen’s deputy mayor for health, said she hopes the city's new push will get young people to consider having children while they are still pursuing their education rather than waiting until they’ve landed their first dream job and bought a home.
“My goal isn’t to get everyone to have children when they are 25. But we want people to consider that it could be a good idea to have children while studying,” Thomsen told Berlingske.
“Decreased fertility affects many young couples today and I don’t think it is a particularly fun experience to go through. I think that the idea of having children is a part of the dream that many people have for their lives,” she added.
See also: More Danish men have a hard time getting it up
Lasse Baggesen, a 23-year-old student at the University of Copenhagen, told Berlingske that he found the city’s campaign “provocative”.
“It’s like they are trying to tell me when I should have kids, and it should be when I want to and have the surplus energy for it and am ready for the responsibility – I am certain that that would be best for both the child and me,” he told Berlingske, adding that he will likely wait to have kids until he is around 37.
23-year-old Julie Jakobsen told the newspaper she’d prefer to wait until the age of 34, but admitted that it was “a bit of an egotistical choice”.
“Right now I only have responsibility for myself and can in principle go travelling for six months if I wanted to. A child would make that sort of thing more complicated,” she said.
See also: Danish students to be taught to have babies
The new campaign from the City of Copenhagen and Spies Travel’s saucy ‘Do it for Mom’ video are hardly the first attempts to convince Danes to have more children and to have them earlier. Denmark’s previous attempts to boost the falling birth rate have included changing the public school system’s sex education curriculum and getting parents to pledge to have more sex in order to save public institutions.