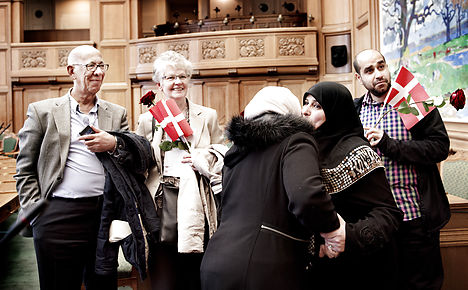 April's citizenship celebration at Christiansborg. Photo: Linda Kastrup/Scanpix
The Venstre government on Monday reached an agreement with four other political parties on what it described as an historic agreement on new citizenship requirements.
The integration minister announced that the changes she suggested last month will now become a reality. The new citizenship rules will include more stringent Danish language requirements, increased demands for financial self-reliance and a more difficult citizenship exam. It will also now be harder to obtain citizenship for applicants who have a criminal record.
See also: 'Significantly harder to get Danish citizenship'
“It is a solid tightening in relation to the awarding of citizenship in Denmark. One must have a command of the Danish language, refrain from criminality and be self-reliant,” Inger Støjberg said at a short press conference after reaching agreement on the changes with the Danish People’s Party, Liberal Alliance, the Conservatives and the Social Democrats.
Støjberg said that the new rules represent the first time that citizenship changes have been agreed upon across traditional political divides since 1999.
The integration minister said she viewed all of the new rules as necessary.
“For me it is a principle that when you become a Danish citizen, it is something that you reach for, something you really need to strive after,” she said.
The anti-immigration Danish People’s Party (DF) welcomed the changes.
“I think this agreement contains some of the basic elements of what DF has always said, that citizenship is a reward for being properly integrated in the Danish society, being able to speak Danish at an acceptable level and refraining from criminality,” party spokesman Christian Langballe said.
The new rules will take effect on October 15th and will apply to “all applications for naturalization regardless of the time of the application's filing” according to a fact sheet provided by the Ministry for Immigration, Integration and Housing.
Language requirements: Applicants should have to pass an oral and written exam in Danish 3 instead of Danish 2.
Self-reliance: Applicants will have to prove that they have supported themselves for 4.5 out of the last five years, instead of the current 2.5 years.
Citizenship test: The current test requires applicants to answer at least 22 of 30 questions correctly. The government wants to make applicants correctly answer 32 of 40 questions.
Criminal record: Under current rules, a criminal record results in a three to 20 year quarantine from obtaining citizenship, depending on the nature of the crime. The government wants to increase that timeframe by 50 percent.