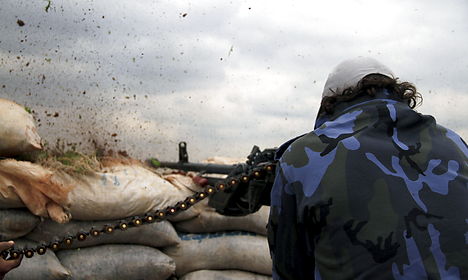 Denmark will introduce new legislation aimed at punishing foreign fighters. Photo: Sultan Kitaz/Scanpix
Justice Minister Søren Pind told news agency Ritzau that the government is prepared to implement tougher laws to punish Danish citizens who join terror groups like Isis to fight in Syria and Iraq.
Pind said he would not detail the plan until it was formally released but said the government had listened closely to recommendations from the Criminal Code Council (Straffelovrådet) to change Denmark’s current laws pertaining to treason.
“It will mean that the rules for treason will be fine-tuned so that one can be punished for working against Denmark. There is no doubt that what we are seeing is treasonous. It works against Danish interests, it radicalizes people against Denmark and contributes to them fighting for Denmark’s enemies,” Pind told Ritzau.
“Denmark is one of the countries that produces the most Syrian fighters so it is something we take very seriously,” he added.
Per capita, Denmark is the second largest European source after Belgium of jihadist fighters going to the Middle East.
Pind’s promise to crack down on foreign fighters comes as a new book revealed that the Danish Security and Intelligence Service (PET) took no action against a Danish citizen who PET knew was actively recruiting fellow Danes to join the fighting in Syria and Iraq.
Pind did not comment on that particular case.
PET estimates that at least 115 Danes have become foreign fighters in Syria and Iraq since Syria's civil war broke out five years ago. Of those, around 20 have been killed in action.