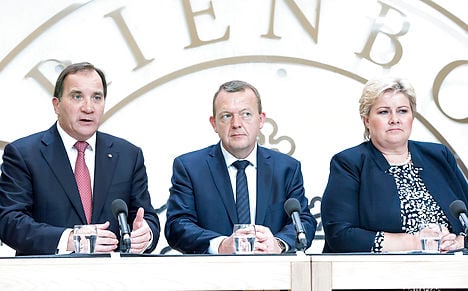 Danish PM Lars Løkke Rasmussen (centre) hosted Swedish PM Stefan Löfven and Norwegian PM Erna Solberg as well as the leaders of Finland and Iceland on Saturday. Photo: Jens Nørgaard Larsen/Scanpix
“The challenge for the Nordic region is not an internal one, but the fact that Schengen's outer borders have broken down,” Solberg said.
“We must now make sure that the outer borders work,” she added as Europe struggles to cope with its worst refugee crisis since World War II.
Schengen, which permits citizens of 26 states including non-EU member Norway to travel without passport formalities, is creaking under the strain of an unending flood of new arrivals with Germany, Austria and Slovakia reimposing border checks.
Solberg, whose Conservative Party is in a ruling coalition with the anti-immigration Progress Party, echoed concerns over Schengen expressed by French President Francois Hollande on Thursday.
Speaking to AFP, Hollande said Schengen was “in danger” due to the absence of registration centres to distinguish between refugees and economic migrants as EU states seek to share out some 120,000 asylum seekers, most fleeing the war in Syria.
Hollande said if there were no controls at the EU's external borders, states would feel obliged to restore national borders and controls “and it will be the end of Schengen.”
Solberg was speaking after a joint meeting with colleagues from fellow Nordic states hosted by Denmark.
Norway controls an external EU frontier with Russia, a border which has been crossed by more than 250 Syrian refugees so far this year.
Sweden's Social Democratic Prime Minister Stefan Löfven said “all those who have the right to asylum should be given it. Those who do not have the right should be sent back.”
And Danish counterpart Lars Løkke Rasmussen agreed, saying: “Those who do not need protection should be sent back as quickly as possible.”
The crisis has sparked some disagreement between the Nordic states with Stockholm criticising Copenhagen for waving through some migrants to Sweden to make asylum claims.
Finland then criticised Sweden for doing the same in allowing a group of mainly Iraqi migrants to cross the border to make their own claims.