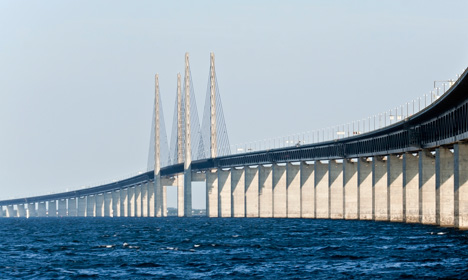 The Russian ship was seen near the Øresund strait. Photo: Colourbox
The warship was seen close to southern Sweden's largest city, Malmö, at around 7pm, reported witnesses speaking to regional newspaper Sydsvenskan.
The paper printed a photo of the vessel, which showed it had a number of towers and appeared to display Russian Navy symbols.

A spokesperson for the Swedish military told The Local's Stockholm office on Friday that a ship seen in the area had indeed come from Russia, but had every right to pass through Danish and Swedish waters.
“The ship was involved in a totally normal right of passage,” said Marie Tisräter, an information officer for the Swedish Armed Forces.
Jenny Larsson, a spokesperson for the Swedish Coast Guard confirmed the same information to the TT news agency, adding that she accepted that the vessel's actions “may seem provocative”.
The Øresund strait, which separates Copenhagen from Malmö is an international shipping zone. Foreign vessels are allowed to pass through as long as they do not behave “menacingly”, according to the rules of the Øresund treaty, signed in 1857.
Both Denmark and Sweden have experienced increased tensions with Russia in recent months, with increased Russian activity in and around Danish air space and even a warning from Russia’s ambassador to Denmark that the Danes have made themselves a target of a potential nuclear attack by joining Nato’s missile defence system.
See also: Russia delivers nuclear threat to Denmark
Russia and Denmark have also laid conflicting claims over the North Pole and Russia has made not one but two separate simulated attacks on the Danish island of Bornholm.
In August, Danish Foreign Minister Kristian Jensen said that he wanted to “reopen an active dialogue with Russia.
“Denmark needs dialogue with Russia in order to gain influence in regard to Ukraine, etc. and to cooperate on the Baltic Sea, among other things,” Jensen wrote on Twitter.
The Danish foreign minister said he wants to take up a number of topics with his Russian counterpart, Sergey Lavrov.
“It won't be a dialogue where we just sit and listen. It will be a dialogue in which we deliver messages,” Jensen told Jyllands-Posten.
Russia has been at odds with the West since its military incursions into Ukraine in 2014 and the Danish Defence Intelligence Service (Forsvarets Efterretningstjeneste – DDIS) warned off “a new frozen European conflict” with Russia in its 2014 national risk assessment report.