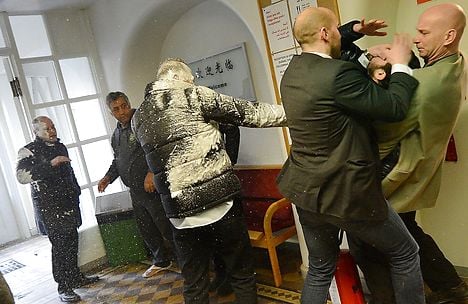 PET had been warned about the man after a March fire extinguisher attack on Swedish Migration Minister Morgan Johansson (to left). Photo: Bosse Nilsson/ Kristianstadsbladet/Scanpix
The Danish Security and Intelligence Service (PET) said in a press release that they were familiar with the 25-year-old stateless Palestinian accused of stabbing and seriously wounding a police officer on Tuesday.
PET said that it had been warned about the man’s mental health and potential loyalty to the terror group Isis, alternately known as ISIL, Daesh or the Islamic State.
See also: Asylum centre attacker may be Isis supporter
“PET received information from other Danish authorities that the suspect may be psychologically unstable, have a wish to travel to Syria or Iraq, that the person in question might have been radicalized and sympathize with ISIL and that the person in question had said that he previously attacked a Swedish minister in Sweden,” an agency statement read.
TV2 reported that the Swedish incident in question was a March 2015 attack on the country's justice and migration minister, Morgan Johansson, who was sprayed with a fire extinguisher while visiting a housing project for refugees.
Johansson was leaving a refugee housing project in southern Sweden when the suspect grabbed a fire extinguisher and sprayed foam over the minister. The politician barely had time to react before a guard from Sweden's Security Service (Säpo) pulled the man to the ground. Johansson was not injured in the incident.
See also: Attack on migration minister at refugee home
The PET statement did not mention the Swedish minister by name, but the agency said that Swedish authorities confirmed that the suspect in the Sandholm stabbing was the same person involved in the attack on a minister.
PET also said that the suspect had previously been cited for threatening a police officer.
In Tuesday’s attack at Sandholm a 56-year-old officer with the North Zealand Police was left seriously injured after being stabbed three times.
The suspect’s asylum application had been rejected by Danish authorities and he was scheduled to be deported. He had been held at Udrejsecenter Sjælsmark, a centre for rejected asylum seekers, since July. The centre is operated by the Danish Prison and Probation Service (Kriminalforsorgen) and is located just a few kilometres from Center Sandholm, where the attack took place.
Center Sandholm is Denmark's largest institution for asylum seekers and currently houses around 600 people. The former military barracks lie around 20 kilometres (12 miles) northwest of Copenhagen.
Url copied to clipboard!