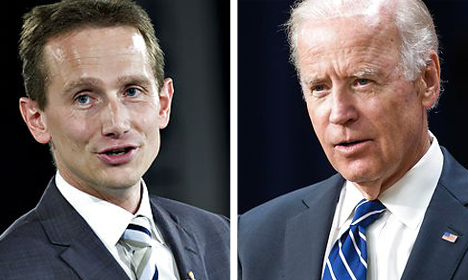 Kristian Jensen tried to get Joe Biden to share his 2016 plans. Photos: Jens Nørgaard Larsen; Nicholas Kamm/Scanpix
With a slip of the tongue, Foreign Minister Kristian Jensen interjected himself into the 2016 US presidential election by mistakenly addressing Joe Biden as “Mr. President”.
“Mr. President – Vice President, sorry. Well, could have been! Can be! Who knows? If you have some news to tell us here, please let us know,” Jensen said to laughter.
See also: US media mocks Denmark's Obama gifts
Biden has served as the 47th vice president of the United States since 2009 following his own unsuccessful presidential run. He is currently the centre of much speculation over whether he will challenge Hillary Clinton and Bernie Sanders for the Democratic nomination in the 2016 race.
Unsurprisingly, Biden did not take up Jensen’s offer to “let us know” and the Danish minister quickly recovered from his gaffe. The incident was reported by a number of high-profile US news outlets.
The EU’s foreign policy chief, Federica Mogherini, took a slight jab at Jensen when it was her turn to take the microphone by overly stressing the word “vice” when she addressed Biden.
See the clip here: