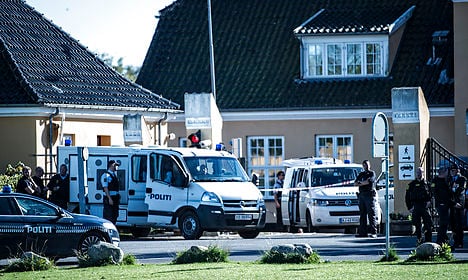 Police said the man's possible radicalization would be investigated further. Photo: Jens Nørgaard Larsen/Scanpix
North Zealand Police said on Tuesday that the man suspected of seriously wounding a police officer in a knife attack at Center Sandholm may have been influenced by radical Islam.
“Traces found in the investigation indicate that the arrested 25-year-old stateless Palestinian may be radicalized and have sympathy for the Islamic State,” a police statement read.
The statement added that the attacker could also be “psychologically unstable”.
See also: Danish police officer stabbed at asylum centre
The man is suspected of stabbing a 56-year-old officer with the North Zealand Police in the early morning hours of Tuesday. The officer was critically wounded in the attack, but police said shortly before noon that his condition had been upgraded to stable.
Police said that the suspect has been within the asylum system since 2013 and was due to be sent out of the country because his asylum claim had been rejected. The man has been housed in Udrejsecenter Sjælsmark, a centre for rejected asylum seekers, since July. The centre is operated by the Danish Prison and Probation Service (Kriminalforsorgen) and is located just a few kilometres from Center Sandholm, where the attack took place.
The 25-year-old man is due to make a preliminary court appearance on Wednesday.