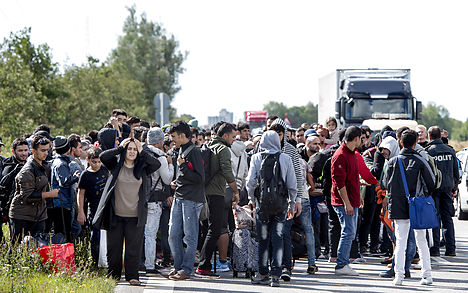 Last year, Denmark granted temporary residence permits to 6,104 refugees. During the course of the same 12 months, only 162 refugees voluntarily took the cash payouts that the state offers to those who are willing to return to their home countries, Berlingske reported on Sunday.
The Danish Red Cross said that the numbers show that a debate about granting refugees temporary status with the hopes of sending them home again is “unrealistic”.
“The average time on the run is 17 years. Seen in that perspective, all of the talk about one-year temporary residence permits is almost like a joke,” Danish Red Cross General Secretary Anders Ladekarl told Berlingske.
“It is, of course, easier to hope that the refugees will go home quickly. But the debate rests upon the unrealistic assumption that the world’s conflicts will end shortly,” he added.
The anti-immigration Danish People’s Party (DF) agreed that the rhetoric about temporary permits doesn’t match the reality.
“One talks about temporary [permits] but carries out policies as if people should be here permanently. It is akin to burying one’s head in the sand in a way that is completely detached from reality,” DF spokesman Martin Henriksen told Berlingske.
Integration Minister Inger Støjberg told the newspaper that the small number of refugees who leave Denmark “shows very clearly why it is a problem that so many asylum seekers come here”.
“It is the government’s clear ambition to minimize the influx into Denmark. Therefore I have said quite clearly that the government plans to tighten up the requirements for foreigners who want permanent residency in Denmark,” she said.
New figures from the Danish Immigration Service (Udlændingestyrelsen) show that 1,785 people sought asylum in August, down from 2,302 in the same month last year.