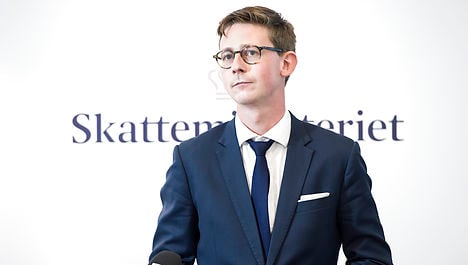 Tax Minister Karsten Lauritzen addressed the Skat scandals on Friday. Photo: Jens Nørgaard Larsen/Scanpix
Skat announced on Friday that four top officials and a personnel leader will be removed from duty as the result of a line of recent scandals, including a potential 6.2 billion kroner ($930 million) tax fraud that was discovered last month.
In that case, it was discovered that Skat had failed to act on numerous warnings that foreign companies had drained the national system by applying for dividend tax refunds “for fictional share holdings, based on falsified documents.”

See also: Denmark hit by potential billion dollar tax fraud
Dividends normally carry a 27 percent tax in Denmark. Under double taxation agreements, however, foreign companies based abroad are entitled to a refund of part or all of the Danish tax, if they have paid tax on the dividend in their country of domicile.
Skat's investigations revealed in August that “a large network of companies abroad” had abused the system.
”The expected criminal fraud in refunds has so far been calculated based on 2,120 individual claims totaling some 6.2 billion kroner in the 2012 to 2015 period,” Skat said at the time.
“In the dividend fraud case, there has been leadership failure from several leaders and at several levels. We are talking about an incomprehensibly large amount that has been wrongfully paid out ,” Skat head Jesper Rønnow Simonsen said in a statement on Friday.
The tax authority was hit with another major scandal just last week, when it was revealed that Skat had overtaxed a number of foreign capital funds and companies on their interest and returns. In one case alone, the tax authority was forced to repay 110 million kroner plus interest to an individual company. Other cases are expected to push the total up in to the billions.
Skat estimated on Friday that the two cases, along with problems in its tax collection IT system, could amount to a total loss of some 14 billion kroner ($2.1 billion)
At a Friday press conference, Tax Minister Karsten Lauritzen addressed the agency’s problems.
“There have been a lot of things in Skat that have not worked,” he said.
Lauritzen announced that parliament agreed on Friday  to a package that will provide the “necessary” resources to the tax authority. Some 400 new full-time positions are expected to be added to help Skat clean up its mess.
Kresten Schultz Jørgensen, a professor of strategic communication at Copenhagen Business School, said that Skat’s line of recent problems have created a serious case of mistrust amongst the public.
“It is catastrophic when the residents lose trust in Skat. A fundamental societal structure is crumbling,” he told news agency Ritzau.

TAXES
How much less tax will Danish commuters pay in 2023?
Url copied to clipboard!