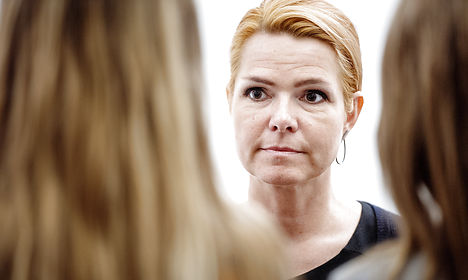 Integration Minister Inger Støjberg. Photo: Bax Lindhardt/ Scanpix
The Danish government wants to make it harder to become a Danish citizen and if Inger Støjberg gets her way, the tougher requirements will not only apply to future applicants but to all of those who have applied to become a Dane over the past 14 months, Information newspaper reported on Wednesday.
Støjberg’s proposal, if approved by parliament, would retroactively apply new criteria to those who have already qualified under the old rules – a situation that Eva Ersbøll, a citizenship expert at the Institute for Human Rights, called “deeply troubling and extremely worrying”.
Ersbøll said that applicants have already completed required tests and paid a significant amount of money to apply for citizenship.
“The applicants have done that based on their assessment that they could live up to the existing rules. Among the applicants, there will be some that cannot live up to the new rules […] In relation to basic rights, it is very problematic that one can just suddenly change the rules for them,” she told Information.
Even within Støjberg’s own Venstre party, she was heavily criticized for wanting to apply rules retroactively.
“It is the state’s role to send a signal of trust and credibility […] I’m not saying [the proposal] is illegal, I’m saying it is obscene,” Venstre politician Kåre Traberg Smidt told Politiko.
Støjberg has argued that because “Danish citizenship is something very special”, the government wants to “make it significantly harder to get Danish citizenship”.
See also: 'Significantly harder to get Danish citizenship'
Her proposal for new citizenship requirements calls alls for increasing the demands for financial self-reliance, making it more difficult to obtain citizenship for applicants with a criminal record and introducing a harder citizenship exam (indfødsretsprøve). The full details can be read here.
Støjberg has already lost one battle over applying new rules to previous applicants. Earlier this month, she suggested that parliament’s Naturalization Committee should reconsider the applications of hundreds of people who are due to receive citizenship next month through a disposition to the regular requirements.
That suggestion was met with heavy resistance and was ultimately killed by the libertarian Liberal Alliance, who refused to support it.
Many foreigners have expressed concern that the new government will also attempt to roll back dual citizenship, which became official on September 1st after years of lobbying. However, Culture Minister Bertel Haarder (Venstre) told a roomful of dual citizenship supporters that the new law “has come to stay”.