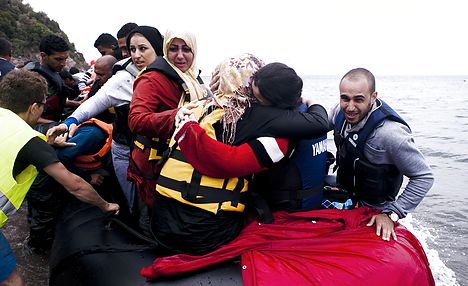 Refugees arrive by boat to Lesbos. Photo: Iakovos Hatzistavrou/Scanpix
EU ministers agreed by a large majority to a refugee redistribution plan on Tuesday with just four EU members voting against it. The four dissenting votes came from Romania, the Czech Republic, Slovakia and Hungary.
“There were four eastern European countries that voted against [the plan]. But the important thing is that now 120,000 will be redistributed so we can move on with what it is really about, which is to stop the influx into Europe,” Integration Minister Inger Støjberg told reporters following the meeting in Brussels.
The UN and other international organizations warned it was the “last chance” for increasingly overwhelmed European states to agree on how to cope with the tide of people fleeing conflict in countries like Syria and Afghanistan.
But central and eastern European states strongly resisted plans to force EU member countries to take a share of the new arrivals from front-line nations.
“I want to confirm that both the interior minister and myself… will unequivocally reject any effort to introduce a permanent mechanism of refugee redistribution,” Czech Prime Minister Sobotka told reporters in Prague.
“We also reject the introduction of quotas,” he added.
Finland abstained from the vote, while Denmark is not a part of the plan due to its opt-out on EU Justice and Home Affairs, which covers European asylum and integration policies.
Denmark has, however, voluntarily agreed to take 1,000 refugees in what was seen as “an important political signal”. Tuesday’s deal left it unclear if those refugees would be considered part of the 120,000 or in addition to that number, but Denmark was not included in the numeric breakdown:

This is how many refugees each country will take if #Council adopts the plan on 23Sept #migrationEU #EPlenary pic.twitter.com/TH7K8Wdb37

The Commission’s agreement must be ratified by EU leaders at a meeting on Wednesday.
Close to 480,000 migrants have arrived in Europe by sea this year according to the UN. The growing crisis has seen countries such as Germany, followed by Austria and Slovakia, announce they would introduce border checks after revealing they could no longer cope with the record influx.
Denmark also temporarily attempted to stop and register all refugees arriving at its borders but ultimately decided to let those who did not wish to seek asylum to travel on to countries like Sweden, Norway and Finland.