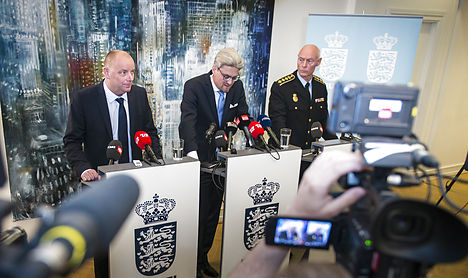 (L-R) Acting PET head Finn Andersen, Justice Minister Søren Pind and National Police Chief Jens Henrik Højbjerg held a joint press conference on the refugee situation in Denmark. Photo: Simon Skipper/
Finn Andersen, the acting head of PET, used a Tuesday press conference to dampen fears that terrorists could be sneaking in to Denmark disguised as refugees.
“Based on the intelligence we have, we don’t believe that organized militant groups will use human smugglers or refugee routes in an attempt to get terrorists into Denmark – simply because the route is not desirable,” Andersen said at a joint press conference with Justice Minister Søren Pind and the head of the Danish National Police (Rigspolitiet) Jens Henrik Højbjerg.
The fear that militants are among the refugees currently entering Europe in record numbers has been an oft-repeated theme in online forums and the terror group Isis has also claimed to have sent thousands of militants into Europe disguised as refugees.
But PET said that its intelligence points to Isis’s claims as “misdirection” and that the majority of the refugees and migrants are actually fleeing from militant Islamic movements and therefore unlikely to have sympathy for Isis or similar groups.
“But it of course cannot be rejected that among the refugees will be individuals who sympathize with Islamic propaganda,” Andersen added.
Pind used the Tuesday press conference to accuse the media for overstating the refugee situation in Denmark, where some 12,400 refugees have entered since September 6th.
“Today there is order and security in the entire country. Also in the borer areas. Look out the windows yourself and stop watching so much TV2 News,” the justice minister said.
Of the estimated 12,400 refugees who have entered Denmark in the past 17 days, only around 1,500 have sought asylum. The others have continued their journeys on to Sweden, Norway and Finland.