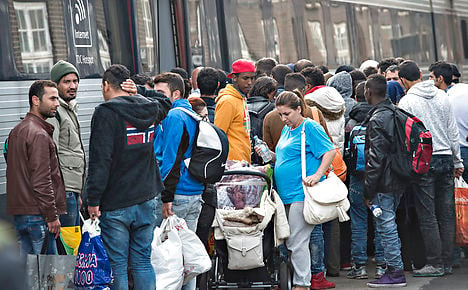 Around 1,500 people have sought asylum in Denmark over the past two weeks. Photo: Claus Fisker/Scanpix
The Danish PM has called on civil society to help the government avoid the mistakes of the past when it comes to integrating foreigners in Denmark.
“For years, our integration efforts have not produced good enough results. Too few immigrants are employed or receiving an education. Too many are living off of passive public support without real contact with the Danish society. We need to do better,” Rasmussen said in a statement.
A study from earlier this year showed that three out of four refugees who came to Denmark a decade ago are still not employed, figures that Danish leaders called “deeply frightening” and “an admission of failure”.
See also: Denmark's refugee integration has 'failed'
In an effort to avoid repeating the same pattern, the PM’s office has convened a meeting on Thursday with leaders of the business community, volunteer groups, schools and universities to “get new inspiration and exchange ideas” on how to improve integration among the refugees currently arriving in Denmark.
“Right now there are many new refugees coming to Denmark. With them come new challenges for our integration efforts – and now we have a shared responsibility to not repeat the mistakes of earlier times,” Rasmussen said.
Rasmussen said that with so many Danes having voluntarily helped refugees since they started arriving in large numbers earlier this month, “we should grab that momentum” and work toward solutions.
“With the new challenges could new opportunities,” he said.
Danish police say that between September 6 and 21 at least 12,400 refugees and migrants have entered the country, but according to the Danish Immigration Service (Udlændingestyrelsen), only an estimated 1,500 have sought asylum with the rest travelling on to Sweden, Norway and Finland.
Denmark has also agreed to voluntarily relocate 1,000 additional refugees as part of the EU's plan to redistribute some 160,000 people.
Rasmussen's Swedish counterpart Stefan Löfven announced a similar initiative earlier this month to help refugees more easily settle in to Sweden.