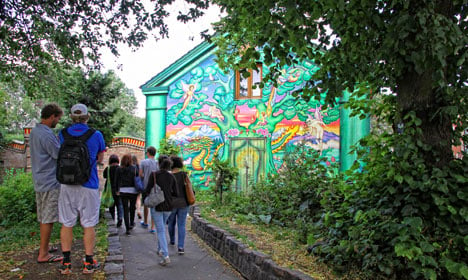 Visitors stream in to Christiania. Photo: Colourbox
When Copenhagen Police carried out an early morning action in Christiania last Thursday it was the culmination of a year’s work and resulted in the confiscation of two kilos of cannabis, three guns, 875,000 kroner and assorted valuables.
See also: Copenhagen Police arrest 29 in Christiania
The 29 arrested individuals appeared in a closed-door court hearing last week, but a freedom of information request from news agency Ritzau has revealed the details of the charges.
Among the arrestees are six men accused of operating several large-scale joint-rolling operations throughout Copenhagen. One man is charged with the production of 187,920 joints, the equivalent of nearly 470 kilos of cannabis.
Fifteen of the arrested individuals are connected to one particular cannabis stall in Christiania, with jobs ranging from the transportation of joints, to direct sales and look-out posts.
Police said that the stall sold at least 300 joints per day along with 1,230 kilos worth of hash and marijuana.
The other 14 people arrested are involved with cannabis sales at five other Christiania stalls.
The sale of cannabis is illegal in Denmark, but an open-air market flourishes in the largely self-governed enclave of Christiania, a former hippie commune in the heart of Copenhagen. The freetown’s cannabis business has been estimated to be worth one billion kroner ($152 million) annually.