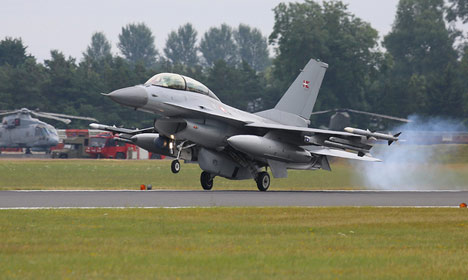 Photo: Ronnie Macdonald/Flickr
Foreign Minister Kristian Jensen told the magazine Ræson that Denmark might expand its current military operation in northern Iraq to include bombing Isis targets in Syria.
“I am open but haven’t decided. We will take a position on it when we send our Danish F-16s out again,” Jensen said.
“There are several things that are essential for me. One is our alliance partners. The other thing is being able to send our Danish soldiers out with a broad mandate behind them. I think that is essential that when we send troops out on such a dangerous mission that they know it is happening with a broad mandate,” Jensen told Ræson.
Jensen announced in August that the seven F-16s and around 90 military personnel that have been part of the international coalition’s fight against Isis in northern Iraq would come back home in October. It is widely expected that the Danish parliament will renew the military mission and the jets are likely to be back in the region by summer 2016.
When the Danish parliament approved the military action against Isis in October 2014, the mission was strictly contained to northern Iraq. But Jensen said that with the terror group, alternately known as Islamic State or ISIL, not distinguishing between Iraq and Syria, it may be time to consider expanding Denmark’s efforts.
“I think that our challenge to a great degree is that for ISIL it is irrelevant whether we are talking about Iraq or Syria – it is a territory that they want to rule over and we need to force them back,” the foreign minister said.
NOTE: An early version of this article stated that Kristian Jensen was considering sending troops into Syria. The magazine Ræson has since apologized and clarified that Jensen was only discussing F-16 fighter jets.