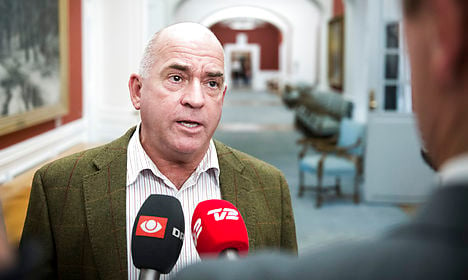 DF's Søren Espersen. Photo: Simon Skipper/Scanpix
The head of the Social Democrats, Mette Frederiksen, over the weekend appealed to the government to enter a compromise on Denmark’s asylum and immigration policies.
But if Lars Løkke Rasmussen’s Venstre government goes along with the plan, the PM risks losing the backing of its largest support party, the Danish People’s Party (DF).
DF spokesman Søren Espersen told TV2 that the idea of Venstre joining the Social Democrats in an immigration compromise that does not include DF is “unthinkable”.
“We will not have it. We will topple the government. Of course we will do that,” Espersen said.
Frederiksen, who replaced Helle Thorning-Schmidt as the Social Democrats’ leader following June’s election, used her first big speech as party leader to challenge Rasmussen to find common ground on immigration issues.
“There should be a broad political agreement. On asylum and foreigners. On legitimate and significant help to [Syria’s] surrounding countries and the world’s refugees. On sharpened efforts against social dumping. On rights and obligations in integration efforts. On a Denmark we can agree on,” she said in her weekend address to party members.
But DF’s Espersen said on Monday that his party would never accept such an alliance.
“And Lars Løkke Rasmussen would never be dumb enough to do it,” he told TV2.
“It doesn’t ad up. The Danish People’s Party is the country’s second-largest party and [immigration] is our lifeblood and we made wonderful agreements with the VK [Venstre and the Conservatives, ed.] government in the 2000s,” Espersen said.
DF's influence between 2001-2011, when Venstre held the prime minister's office, is widely credited for moving Denmark much further to the right on immigration issues.
Frederiksen’s overture to Rasmussen and Espersen’s subsequent threat to topple the government come after the PM seemingly reversed course on the “immediate halt” to refugees that he campaigned on by announcing that Denmark would voluntarily take part in the EU’s redistribution of refugees despite the country’s opt-out on European asylum and immigration policies.