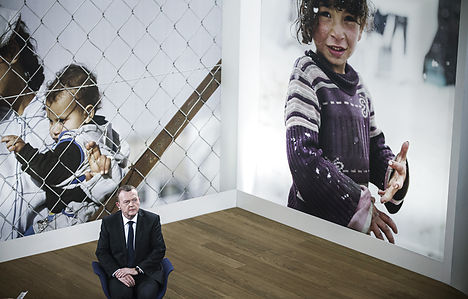 Prime Minister Lars Løkke Rasmussen was one of many well-known Danes who spent their Sunday night raising money for Syria. Photo: Claus Bjørn Larsen/Scanpix
The Syrian refugee crisis was broadcast into the homes of Danes on Sunday night with a three-hour fundraiser simultaneously aired on the the nation’s two dominant broadcasters, DR and TV2.
Celebrities ranging from Prime Minister Lars Løkke Rasmussen to The Killing star Sofie Gråbøl were manning the phones as the ‘Hjælp nu!’ (Help now!) fundraiser generated over 86 million kroner ($13 million) for the millions of Syrians who are either internally displaced or have fled to neighbouring countries.
The raised funds will be distributed to 12 different humanitarian organizations that will convert Danes’ generosity into things like winter coats, boots, propane for cooking and medical help.
Sunday night’s programme marked the first time that the rival broadcasters joined forces for a fundraiser since 2011, when they helped raise 110 million kroner for various projects in Africa.
The Syrian fundraiser was not without its controversy. When the programme was announced, many Facebook reactions were negative.
“Never, we should help our own first,” Susanne Sus wrote, while Bjarne Larsen said: “As long as there are cuts to our elderly, sick and child services remain, I'm giving nothing.”
But despite the mixed response online, the head of the Danish Refugee Council said that the fundraiser’s results show that “Danes are ready to help when it is needed.”
“This money will make a major difference for the Syrians who are today living in ramshackle buildings and often cannot get food as they prepare to face the fifth winter since the war started,” Andreas Kamm told DR.