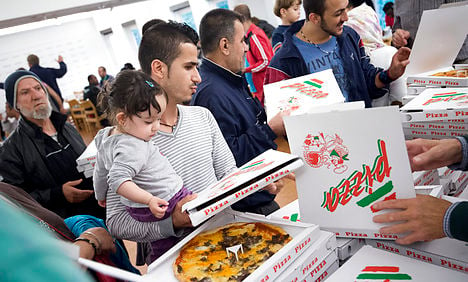 A local pizzeria owner donated 250 free pizzas to residents of the asylum centre Ny Skovlund in Holstebro on Thursday. Photo: Morten Stricker/Scanpix
Danish authorities received 2,495 applications for refugee status between April and June according to Eurostat data published on Friday morning.
That number represents a 66 percent increase over the 1,505 applications made between January and March, while the average increase among the European Union was just 15 percent. Only the Netherlands, Latvia, Austria and Finland saw bigger quarterly increases than Denmark.
Syrians accounted for 42 percent of Denmark's second quarter asylum applications, twice the rate of the EU average. The next largest group to Denmark were Eritreans at 21 percent. That number too was above the EU average, which stood at 13 percent.
Denmark’s second quarter numbers were the 12th highest among the EU28. Non-EU countries Norway and Switzerland also received more first-time asylum applicants in the second quarter.
Denmark’s share in the EU total was just 1.2 percent, while neighbouring Germany received 38 percent of all applications. Nordic neighbour Sweden had 6.7 percent of the EU total, while Hungary had the second highest share at 15.3 percent.
Hungary was also the European state with the largest number of asylum seekers relative to its population, at 3,317 per million inhabitants.
That was streets ahead of Austria at 2,026, Sweden at 1,467 and Germany at 997 per million. Denmark had 441 applicants per million inhabitants.
The refugee crisis that has been affecting Europe for months did not truly hit Denmark until earlier this month. Since September 6th, an estimated 8,900 refugees have arrived in Denmark. Prime Minister Lars Løkke Rasmussen said on Thursday that around 1,000 of those have applied for asylum.
Rasmussen has announced that despite Denmark's opt-out on European asylum policies, the nation will voluntarily accept 1,000 of the 160,000 refugees that European leaders have agreed in principle to redistribute across the Union. That move was welcomed by European Council President Donald Tusk and hailed as an “important political signal” of Denmark's commitment to a unified European approach to the refugee crisis.