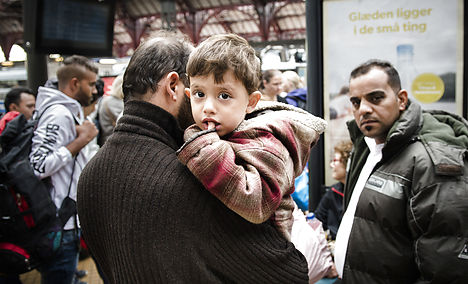 Around 1,000 refugees and migrants are currently arriving at Copenhagen Central Station every day, but most are just passing through to their final destination. Photo: Simon Skipper/Scanpix
“Denmark has become the Hungary of the Nordic region, a transit country to a place that will welcome a refugee,” the liberal Politiken daily wrote recently.
Known for their egalitarian policies, the Danes have been named the world’s happiest people in numerous surveys and enjoy one of the world’s highest standards of living.
But as Europe’s refugee crisis spread to Scandinavia, many were shocked to wake up to pictures of refugees running from police and walking on motorways just to reach the Swedish border.
“Denmark is not a good country for us,” Abdulrahman Alshehagi, a 26-year-old Syrian lorry driver, told AFP after walking on the country’s roads and then taking the train across a bridge to the southern Swedish city of Malmö.
For Copenhagen politicians, the sight of refugees avoiding Denmark at all costs may initially have seemed like something that would appeal to voters, especially the one-in-five who in a June general election backed DF.
The right-of-centre Venstre party, which took power as a minority single-party administration in June, campaigned on tougher asylum rules and halving benefits for newly arrived immigrants to make the country less attractive to refugees.
To ensure that they got the message, it placed adverts in several Lebanese newspapers on September 7 warning that “Denmark has decided to tighten the regulations concerning refugees.”
Counter reaction
Published just days after images of drowned Syrian toddler Aylan Kurdi shook Europe and the world, the adverts drew widespread criticism and helped galvanize those who oppose the government’s immigration policies.
Within days, a Facebook group for Danes helping asylum seekers with their everyday lives attracted thousands of new members and became a forum for people willing to drive refugees to Sweden, which has more generous asylum rules.
Nynne, a 44-year-old woman from an affluent part of Copenhagen, said that although she had never considered herself an activist, she got into her car and drove to Lolland, a rural part of Denmark where many refugees arrive on ferries, because she “wanted to do something.”
After unsuccessfully scouring the pitch dark roads, postings to the Facebook group eventually guided her to three Iraqi Kurds who wanted to go north of the border.
To avoid unwanted attention, the three spent the night in her apartment until the border crossing was busier.
After briefly suspending rail links between Denmark and Germany to prevent refugees from entering, Danish police last week said they would allow people to pass through the country without registering if they were not planning to seek asylum.
On Tuesday they said 7,500 migrants had entered the country since September 6th, of whom less than 1,000 had applied for asylum.
Refugees welcome?
In another sign that public support for Denmark’s ever-tighter asylum rules may be waning, some 30,000 people joined a Copenhagen rally on Saturday in favour of taking in more refugees.
Paul Tyler, a consultant who moved to the city from London 10 years ago, said he went to the demonstration with his children because the dramatic gains of DF meant “people are now realizing that if you want things to happen you have to be more proactive.”
EU member Denmark has negotiated an opt-out of Europe’s immigration policy and there is little support in parliament for accepting refugees under a European quota plan.
Some lawmakers say Denmark has done enough: Last year, it was the EU’s fifth largest recipient of refugees, in relation to its size.
By contrast, a Monday survey by pollster Voxmeter showed that 78 percent of Danes wanted the country to be part of the EU’s plan to distribute refugees around the continent.
Bjarke Møller, head of the pro-Europe think tank Europa, said Danish politicians were pushing “policies of the past.”
For almost 15 years, the growing influence of DF — now the right-wing bloc’s biggest party — fuelled Danish lawmakers’ ever-harsher rhetoric on immigration.
“The political parties are like supertankers that chart a course and then don’t want to change it,” he told news agency Ritzau.
Still, after Denmark’s two biggest broadcasters on Monday announced a Syrian fundraiser, many Facebook reactions were negative.
“Never, we should help our own first,” Susanne Sus wrote, while Bjarne Larsen said: “As long as there are cuts to our elderly, sick and child services remain, I’m giving nothing.”
In the right-wing Jyllands-Posten daily — which in 2005 published the Prophet Mohammed cartoons that triggered deadly protests in some countries — little has changed.
On September 4, while the world was still reeling from the images of Aylan Kurdi’s dead body, it published an editorial titled “Europe’s borders” questioning “how much religious and cultural diversity there is room for in Europe.”