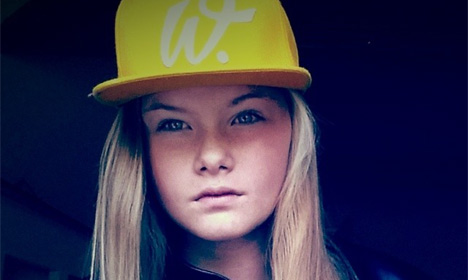 A selfie posted to the teen's Instagram account. Photo: Instagram
A Danish teenager who admitted to regularly watching jihadist videos online has been sentenced to nine years in prison for stabbing her mother to death together with an Iraqi friend.
Lisa Borch, then 15, and her 29-year-old friend Bakhtiar Mohammed Abdullah were sentenced on Monday for killing Tina Rømer Holtegaard in her sleep by repeated stabs to the chest in October 2014.
During the girl’s trial, it was revealed that she had become radicalized by watching Islamist propaganda online.
“She has said herself that she sometimes watches Islamic State videos,” prosecutor Karina Skou told AFP. The investigation did not determine which videos from the terror group – alternately known as Isis or IS – the defendant had seen.
On the night she stabbed her mother, Borch had also reportedly been watching videos of beheadings.
After stabbing Holtegaard at least 20 times, Borch called the police and reported that she had seen “a white man” running from their home in the northern Jutland town of Vissel.
“It can be indisputedly upheld that Lisa Borch during the emergency call pretended to give CPR” in the bedroom “even though she was actually in the workshop,” the district court said in its ruling.
After her mother went to bed, the girl claimed to have been watching TV and admitted to having watched “something with IS” on her mother's iPad.
Asked if the video clips had included IS beheadings, she said she couldn't remember.
When police arrived, prosecutors said that Borch would not pull herself away from her computer and merely pointed upstairs toward her mother’s dead body.
A forensic investigation found that there had been Internet searches made for mass executions on a laptop belonging to Abdullah, who claimed Borch was responsible for them.

The teen's still-active Instagram account is filled with selfies.
Prosecutors said that Borch and her Abdullah agreed to kill Holtegaard together but in court both blamed each other for the act.
“Lisa showed him pictures on her phone of guns and machine guns, but that was not something he was interested in,” his testimony read.
However, the prosecutor said Islamic radicalisation “had not been a major theme” in the case.
“It could very well have been someone who was subjected to something cruel,” she said of the video clips.
The 29-year-old Iraqi was sentenced to 13 years in prison, after which he will be deported.
Following Monday’s conviction, Borch’s stepfather has stepped forward to say that the teenaged Dane was obsessed with the terror group. He fears that she will become even more radicalized in prison.
“She loves to talk about IS and their brutal behaviour in the Middle East,” 58-year-old Jens Holtegaard told Ekstra Bladet.
“I don’t even dare to think about what might develop while she is serving time. She needs professional treatment,” he added.
Speaking to tabloid BT, Holtegaard said that his stepdaughter had become “more and more
introverted” in the spring of 2014 but had been denied psychiatric care by the authorities “because Lisa was not sick enough”.
Along with the prison sentences, the two have also been ordered to pay a total of 216,000 kroner in restitution to Borch’s siblings and 254,000 kroner to widower Jens Holtegaard. Borch was also stripped of her right to an inheritance.
The pair have appealed against the decision to the High Court.