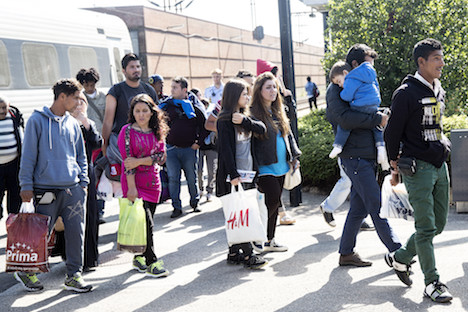 Refugees moving to a Red Cross asylum centre in Padborg. Photo: Mikkel Berg Pedersen/ Scanpix
The Novo Nordisk Foundation announced on Tuesday that is donating two million kroner ($303,000) to the Danish Red Cross for improving the health of newly-arrived.
The donation is earmarked for healthcare and other assistance such as medicine and medical equipment, psychological services and the purchase and preparation of food for refugees.
See also: Danish university targets refugee health and education
“We are extremely grateful to the Novo Nordisk Foundation for its contribution […] This is money that will really benefit persecuted people and Danish society in both the short and long term,” Anders Ladekarl, the secretary-general of the Danish Red Cross, said in a press release.
The CEO of the Novo Nordisk Foundation, Birgitte Nauntofte, said the commitment is meant to improve the rough conditions faced by refugees.
“In the current situation, it is both natural and timely to make a contribution that can help newly arrived refugees in Denmark to meet their basic needs, including healthcare, food and beverages and advice,” she stated.
Nauntofte also praised the Red Cross for its work.
“The Danish Red Cross is part of the relief efforts in Denmark, and its experience and competence will enable it to quickly initiate assistance in the best possible way,” she said.