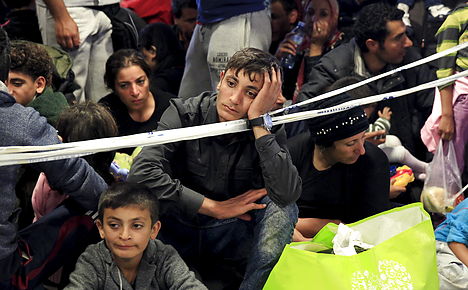 Migrants, who mostly crossed into the country from Serbia and are hoping to make their way to Austria, wait for trains in Budapest on Sunday. Photo: Bernadett Szabo/Scanpix
Facing the biggest refugee crisis since the Second World War, EU ministers agreed “in principle” on relocating a total of 160,000 asylum seekers across at least 22 member states – 40,000 discussed earlier this summer as well as another 120,000 – at an emergency meeting in Brussels on Monday.
But the practical details of the scheme were left vague and stopped short of introducing binding quotas, something Denmark has repeatedly said it will not participate in due to its opt-out on EU Justice and Home Affairs.
See also: Denmark says no to EU's 160,000 refugee plan
Denmark was represented at the meeting by Integration Minister Inger Støjberg, who had already expressed pessimism on an agreement being reached.
“No, there was not an agreement. There is a majority who want to distribute the many refugees but there is no agreement on how,” Støjberg told public broadcaster DR.
Monday's meeting came after Germany, followed by Austria and Slovakia, announced it would introduce border checks after revealing it could no longer cope with the record influx.
Europe's top economy had previously signalled it would throw open the country's borders to Syrian refugees but ministers explained that regions could no longer cope with the rising number of arrivals.
But Denmark, which took in the EU's second largest number of Syrian asylum seekers per capita last year, said it had no plans to implement new border controls.
On Sunday, Støjberg said she “fully respected” Germany’s decision but didn’t see the need to shut down Denmark’s borders.
“The Danish authorities have the situation under control. There is therefore no serious threat to public order or internal security in Denmark,” she told DR.
European ministers will meet again on the refugee situation on October 8th.