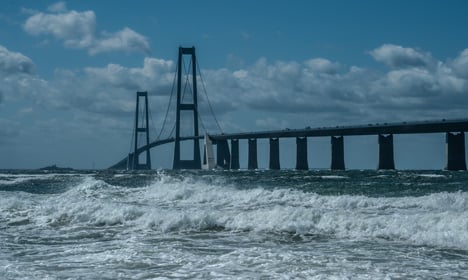 The Great Belt Fixed Link. Photo: Colourbox
The bodyguard who drove Crown Prince Frederik over the closed Great Belt Fixed Link (Storebæltsbroen) in January will no longer face charges, the public prosecutor office (Statsadvokaten) announced.
The bodyguard, who works for the Danish Security and Intelligence Service (PET) had been charged with violating traffic laws for his role in Crown Prince Frederik’s much-discussed January journey over the bridge.
See also: Prince Frederik slammed for 'irresponsible' trip
Frederik’s vehicle crossed the bridge while it was was closed to all other traffic due to hurricane-strength winds and raised water levels. The prince’s bridge trip created scores of headlines and was slammed as “completely unacceptable” and “completely irresponsible”. The Danish Royal House and PET both ultimately had to issue public apologies in the wake of the public outcry.
The Independent Police Complaints Authority (Den Uafhængige Politiklagemyndighed – DUP) decided in April to charge the PET agent for violating the Danish Road Traffic Act but prosecutors said on Tuesday that it couldn’t be proven that Frederik’s vehicle was properly informed that it could not cross the bridge.
See also: Agent charged for Prince Frederik's bridge trip
“In my view, it cannot be denied that those involved – because of the communication and the circumstances, including the opening of the bridge booms – had the impression that they could cross the bridge,” attorney Jan Reckendorff said in a statement.