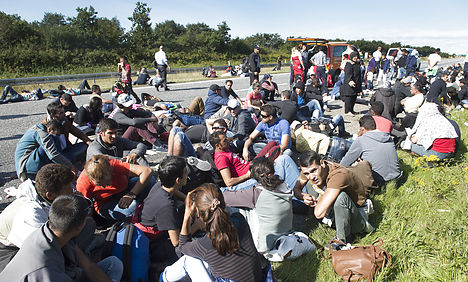 Refugees and migrants along a Danish motorway last week. Photo: Claus Fisker/Scanpix
The University of Copenhagen (KU) has asked the Danish government for permission to create extra student spaces for refugees and migrants arriving in the country. The university wants to provide an education to refugees who receive a temporary residence permit and those who are having their applications processed.
“A lot of the refugees who are coming to the country right now are highly educated and with a fast and targeted effort, they could be better integrated and get easier access to the Danish labour market,” the university’s rector, Ralf Hemmingsen, said.
“Refugees who receive temporary residence permits should have access to education from day one. Many of these people have needed competencies, education and experience, whether they remain in Denmark or later return to their home country,” he added.
Hemmingsen said that KU is “ready to take on this challenge” but is not allowed to do so under the current rules.
“We hope therefore that the government will adjust the rules. Both for the sake of the refugees and for Denmark,” he said.
Promoting refugee health
KU has also announced that its Danish Research Centre for Migration, Ethnicity and Health is behind the newly formed Danish Association for Migrants’ Health, which aims to promote healthy living among refugees, migrants and asylum seekers.
The initiative is a joint venture with the migration medical clinics in Odense and Hvidovre, the Danish Red Cross and the children’s ward at Copenhagen’s Rigshospitalet.
“Improved health among migrants is a prerequisite for successful integration. It is, however, also a challenge that demands a collective, coordinated effort involving many different players,” KU associate professor Marie Nørredam, a co-chair of the new association, said.
In addition to promoting health among migrants and refugees, the association says it will also inform Danish society of migrant health issues and Denmark’s rising health inequality.
“Migration is at the top of the global and local agenda, only the importance of health and disease is often set aside in debates about migration and welfare,” Nørredam said.