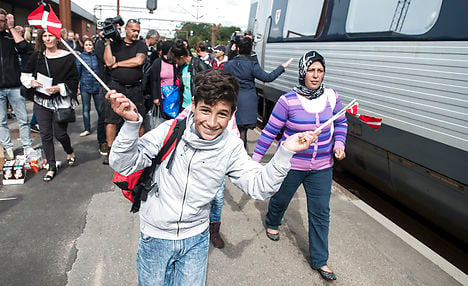 Refugees arrive at Padborg Station last week. Photo: Claus Fisker/Scanpix
Last week marked the first time that Europe’s long-running refugee crisis was truly felt in Denmark.
The seven days included tumultuous scenes at the harbour town of Rødby and the southern Jutland town of Padborg, the temporary closure of rail connections to Germany, a change of course from Danish police on registering asylum seekers and an outpouring of support from Danes who helped refugees through private initiatives and rallied for their cause in the capital.
Based on information from police in the two busy border locations, the Danish National Police estimate that at least 5,000 refugees and migrants came to Denmark between Sunday, September 6th and Sunday, September 13th.
An estimated 900 of those officially sought asylum in Denmark. By comparison, 1,038 people sought asylum during the entire month of July according to the latest available figures from the Danish Immigration Service (Udlændingestyrelsen).
The Danish National Police stressed that their number was only an estimate.
“We are talking about a border to another Schengen country and there is therefore significant uncertainty involved with discussing the number of incoming foreigners,” a police statement said.
The statement added that many Danish officers have been relocated to border crossing areas and that Danish officials are working closely with their counterparts in Germany, where temporary controls were implemented at the Austrian border on Sunday.
Justice Minister Søren Pind said that the announcement from the Danish National Police was his decision.
“I’ve coordinated with the Danish National Police so that the public will in the future receive police estimates over the refugee situation,” Pind wrote on Twitter.