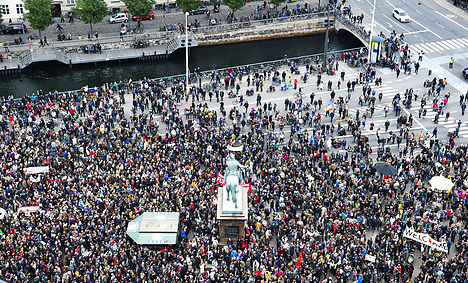 Some 30,000 people joined a rally in Copenhagen on Saturday in favour of taking in thousands of refugees seeking shelter in Europe, police said.
“Everything is taking place in a calm and orderly way,” said a post on the official Twitter feed of Copenhagen Police, indicating that roughly 30,000 people had gathered for the demonstration. The 'Welcome to Denmark' rally seen from above. Photo: Claus Bech/Scanpix
Demonstrators held up signs reading “Refugees Welcome” and “Europe is the closest neighbourhood to Syria”.
Another smaller rally took place in Padborg, a village on the German border through which many refugees have passed, where some 400 people gathered to show their support.
At the same time, a counter-demonstration in the same village drew around 150 people who called for the borders to be closed, local police said.
After briefly suspending rail links between Denmark and Germany to prevent refugees from entering, Danish police on Thursday allowed services to resume, saying they would allow people to travel without registering if they were not planning on lodging an asylum claim.
Between Sunday and Thursday, an estimated 3,200 refugees and migrants arrived in Denmark. Only 668 have formally sought asylum in Denmark, while many others have travelled on to Sweden. Danish officials say that there is also an unknown number of refugees who remain in Denmark but have not been registered.