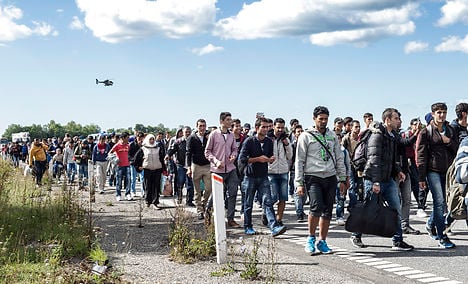 PET warned that the large number of refugees could cause security issues. Photo: Jens Nørgaard Larsen/Scanpix
In a written comment to Berlingske newspaper, the security agency PET said that although it does not see the vast majority of refugees as a direct threat to security, there is the possibility that extremists are among the large numbers currently arriving in Denmark.
“PET is aware that among the refugees from Syria/Iraq could be people who sympathize with militant Islam and could consider acting on the encouragement of militant Islamic propaganda to carry out attacks against counties participating in the international coalition against IS [Islamic State, ed.], including Denmark,” the statement read.
Additionally, PET said that the refugees and migrants themselves could become the target of attacks from groups on the far right.
“In our neighbouring countries, we have seen examples of attacks and threats of violence against refugees, immigrants or institutions connected to them, carried out by people opposed to the current influx of refugees. PET is aware that such a development could also occur among people with politically extreme views in Denmark,” the agency said.
Recent weeks have seen the attempted arson of a Copenhagen area Muslim centre and an attack on an asylum centre in Jutland. Additionally, two Muslim cemeteries have been desecrated since July, first in a Copenhagen suburb and later in Odense.
Between Sunday and Thursday, an estimated 3,200 refugees and migrants arrived in Denmark. Only 668 have formally sought asylum in Denmark, while many others have travelled on to Sweden. Danish officials say that there is also an unknown number of refugees who remain in Denmark but have not been registered.