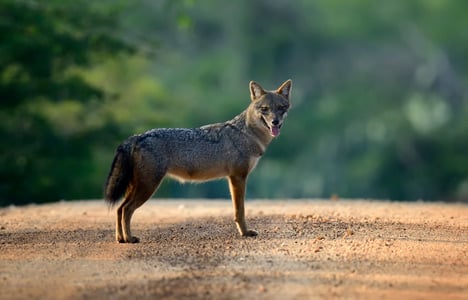 The jackal is not a threat to humans. Photo: Colourbox
DNA samples of an animal that was struck and killed by a vehicle in Jutland earlier this summer have confirmed that the jackal has now also arrived in Denmark.
The European jackal a carnivore that is just a bit smaller than a golden retriever. It is normally found in the Balkans and southern Europe but has also been registered in Austria and Germany.
When tests confirmed that the animal struck by a vehicle was a jackal, it marked the first recorded appearance of the species in Denmark.
According to geneticist Liselotte Wesley Andersen, who examined the jackal, it was a male with no testicles which could mean that it was held in captivity.
The Danish Society for Nature Conservation (Danmarks Naturfredningsforening – DN), however said that there is nothing to indicate that the jackal has escaped from captivity and suggested that it had come to Denmark via the same “nature highway” that recently led wolves back to Denmark.
See also: First proof that female wolves are in Denmark
“It is always incredibly exciting and very rare to find new species of mammal in the Danish nature,” DN spokeswoman Ella Maria Bisschop-Larsen said in a statement.
DN said that colleagues in Germany have also recorded more jackal observations, leading the Danish agency to believe that more jackals could be on their way north.
The jackal eats small to medium-sized animals including rabbits, rodents and waterfowl. They will also eat insects, lizards and fruits. Jackals are not a threat to humans.