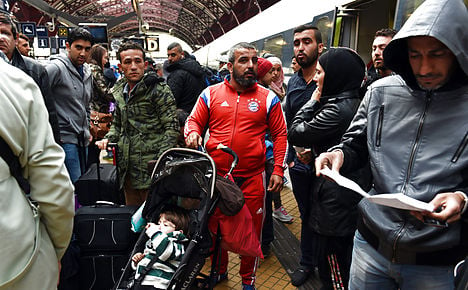 Refugees arrive at Copenhagen Central Station on Thursday. Photo: Linda Kastrup/Scanpix
In a move already signalled earlier this week, Denmark has said it will not participate in the EU’s plans to resettle some 160,000 refugees.
Integration Minister Inger Støjberg confirmed on Friday that Denmark will not be involved in the distribution of refugees amongst EU countries, a plan championed by European Commission President Jean-Claude Juncker on Wednesday.
See also: Denmark rejects EU call for refugee quotas
“We will not take part in the 160,000 asylum seekers that shall be distributed. We won’t do it because we have an opt-out [on EU Justice and Home Affairs, ed.] and because we are already taking in a great deal now,” Støjberg told Berlingske.
Støjberg said that Denmark’s decision should come as no surprise.
“We have an opt-out – it is very well-known that we won’t participate in the redistribution of these 160,000 so therefore I don’t think this is in any way something dramatic from a Danish viewpoint,” she said.
Speaking to Jyllands-Posten, Støjberg said that she saw “simply no reason” to take some of the asylum seekers since Denmark is already “taking absolutely a very large portion already”.
Denmark received more than 15,000 asylum requests in 2014. In relation to its population size, it was the fifth-biggest recipient in the EU, ahead of Germany, according to Eurostat.
According to a memo from the Ministry for Immigration, Integration and Housing obtained by Jyllands-Posten, Denmark could risk exclusion from the EU’s Dublin Regulation on asylum seekers if the nation does not agree to the redistribution plan. Støjberg however said she didn’t think the plan that Juncker put forth on Wednesday will be approved in its current form.
“If the proposal from the commission is implemented from one end to the other as it looks right now, then it is correct that we sooner or later will face a decision [on Denmark’s continued participation in the Dublin Regulation, ed.]. But I think it would be the first time in Europe’s history that such a major proposal would be but implemented from one end to the other,” she told Berlingske.
The integration minister stressed that Denmark strongly prefers to remain part of the regulation, which which states that the first EU nation to register an asylum seeker must process the claimant’s application.
Denmark is part of the Dublin rules despite its opt-out because it entered a so-called parallel agreement with the EU. According to the parallel agreement, Denmark will have to inform the EU if it intends to go along with changes to the regulation. If Danish officials don’t clarify the country’s stance within a given time period, Denmark’s parallel agreement is considered annulled.
Experts have warned that if Denmark does not go along with the EU plan and thus ends up excluded from the Dublin Regulation, the nation would become a prime destination for asylum seekers and human smugglers because Denmark would no longer have the option of sending people back to another European country.
Denmark's opt-out on EU Justice and Home Affairs makes the Nordic nation exempt from having to participate in a shared European approach to the current refugee crisis, even though joining a EU-wide solution could result in Denmark taking in fewer refugees than it does now.
Denmark will hold a referendum on ending its opt-out on December 3rd, but the new proposed ‘opt-in’ model would have no bearing on Denmark’s asylum and immigration policies.