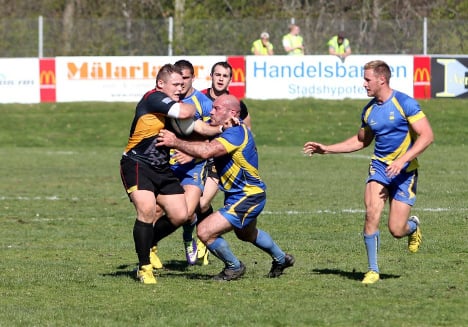 Sweden's national side on the pitch versus Germany in April 2014. File photo: Fredrik Wicksell/Swedish Rugby Federation

The 2015 Rugby World Cup, set to kick-off in London on September 18th, has been billed as the third-largest international sporting event in the world behind the Olympics and football’s World Cup.

And while athletes from Norway, Sweden, and Denmark may not be taking the pitch to represent their countries in England this autumn, that doesn’t mean sports fans in all three countries won’t be buzzing about the event.

“These days if you ask a Dane about rugby, most of them are aware of the World Cup. It’s a really big thing and I think awareness and excitement about the World Cup is getting even more Danes to wake up to the sport,” Simon Mountford, treasurer with the Copenhagen-based Exiles Rugby Club, tells The Local.

“And for us in rugby circles, the World Cup is like Christmas.”

Mountford, who hails from London, arrived in Copenhagen in 1982 on what was supposed to be the first stop on a round the world trip.

“I was having fun and just ended up staying,” he explains. It didn’t take long before the English rugby enthusiast hooked up with the Exiles, a club formed in the late 1960s primarily by expats and other “exiles” from traditional rugby playing countries around the world.

“The Exiles didn’t start rugby in Denmark, but they’ve done a lot to contribute to the sports success and growth in Denmark,” says Mountford.

Scandinavia may not be the first place that springs to mind when it comes rugby, but the region boasts nearly 100 rugby clubs with more than 8,500 active members who are as passionate about the sport as fans from Australia, New Zealand, England or any other nation with long rugby traditions.

Indeed, rugby is far from a “new” sport in Scandinavia, with national rugby federations taking shape in both Sweden and Denmark in the 1930s.

Watch the Rugby World Cup from anywhere with Viaplay

The first recorded rugby match ever played in Stockholm took place in 1931 when teams from two visiting British warships squared off in the city’s Olympic Stadium in front of 7,000 spectators. And in 1949, Sweden and Denmark met in Scandinavia’s first-ever international rugby match (the Swedes won 6-0).

The sport’s foothold in the region firmed up in the 1960s, with expats, foreign students, and Scandinavians returning from stints abroad helping to establish clubs like the Exiles and promote rugby across the region.

For many foreigners “fresh off the boat” in Scandinavia, finding a rugby club was one of many things on the to-do list of getting settled in their new home.

A case in point is Chris Spencer, a self-proclaimed “oil and gas man” who arrived in Norway from England in the late 1980s, settling in Stavanger, Norway’s oil industry hub.

“I’d always loved playing rugby since my school days, so I was pleased to find a club when I arrived here,” he recalls. Chris Spencer says there's plenty to smile about when it comes to rugby in Norway.

Back in those days, the clubs often played teams fielded from visiting British warships, which participated in Nato exercises off the coast before docking at the nearby naval base.

“The British destroyers all had crews of about 150 men, and they almost always had a rugby team,” says Spencer. “Playing those sailors was our bread and butter.”

Spencer, who moved in and out of Norway before returning in late 2008 for his current tour of duty, now serves as the vice president of the Norway Rugby Federation. He says the sport has been a constant for him and is a “great sport” for expats—no matter where they are.

“It’s a very welcoming sport, and clubs are always open to new members, and it’s easy to meet new friends,” he explains.

Viaplay: the best way to watch the Rugby World Cup

Irishman David Hanley, who moved to Sweden in 2010 to be with his Swedish girlfriend and now heads up technical development with the Swedish Rugby Federation, agrees.

“The rugby family is a good family. Everyone is always welcome,” he says.

Rugby had been a big part of Hanley’s life growing up near Cork. Before arriving in Sweden he contacted the rugby federation to inquire about how he could get involved. Before long he found himself coaching Sweden’s U18 national team and then heading up a project to help expand awareness of the sport among school children and families.

“Rugby has long been viewed as a foreign sport played by older foreign men, and not something you choose for your son or daughter,” Hanley explains.

But as Sweden is a “sports-mad country”, Hanley reckoned rugby was poised for growth. And just a few years into the project, he’s been proved right.

“Rugby is now the fastest growing kids’ sport in Sweden,” he claims.

The key, he says, has been educating parents and kids about “rugby values” – including respect, discipline, integrity, and passion – that often remain hidden behind preconceived notions of violence. “Once parents started waking up to these values, they really became passionate about the clubs,” says Hanley.

In a nod to Swedish fika culture, many rugby clubs in Sweden have adopted what Hanley calls the “third half” after games.

“Kids from both teams have a hotdog and a juice, while parents enjoy coffee and a bun,” Hanley explains. “It’s a great way to bring everyone together in a relaxed, social atmosphere – like the traditional pint you enjoy with opponents after a senior game.”

“I guess post-game rugby celebrations are like a midsummer dinner party,” Hanley laughs.

While rugby has grown steadily across Scandinavia, officials in all three countries cite a common challenge to further expansion that may be unique to the region: handball.

“A lot of the same skills are used in both sports; the physicality, the ball handling skills, etc.,” Mountford explains.

However, the handball’s popularity in Scandinavia means that rugby clubs can have a hard time convincing younger players to test those skills on a rugby pitch rather than in a sports hall.

“If they banned handball – which is hugely popular here – maybe there’d be an explosion in the number of rugby players,” he jokes.

Spencer in Norway agrees handball and rugby share many similar skills, adding the increased physicality of rugby can be a draw for handball players looking to “finish off tackles”.

“I’ve met a lot of ex-handball players who say, ‘I’ve always wanted to do that!’ after they experience their first rugby tackle,” he says with a laugh. “The number one thing is getting people to try it. Most who try rugby really enjoy it.”

And with the Rugby World Cup just days away, rugby fever is palpable across Scandinavia.

“The World Cup is always a big deal,” says Spencer, who was thrilled to learn that every game will be shown on the Viaplay streaming service and app.

“It’s great that so much of it will be broadcast or available through Viaplay. Normally it’s not so easy to see top-level rugby here,” he continues.

“I’m looking forward to watching games with my 15-year-old son, like my dad did with me.” Mountford in Denmark is also excited it will be so much easier to watch the World Cup in Scandinavia, expecting it will help recruit more Danes to the sport.

“In the past it’s been hard to watch the games, both because they were held on the other side of the world and because so few outlets broadcast the games,” he says.

“Now with so many games available on TV and mobile devices – and at convenient times – more Danes are going to be aware and may zap over to watch a few games and get hooked.”

In Sweden, the rugby federation has ambitious goals of doubling membership to 10,000 by 2020, something Hanley reckons is doable, especially with the help of big international events like the World Cup.

“Having the World Cup in Europe and easily viewable makes it a whole new ballgame,” he says. “It’s a big deal that our members can see the games at convenient times.”

To mark the World Cup, Swedish rugby is also planning a national youth festival and championship to be held on September 26th in Enköping. The event will include youth games, a match-up between Sweden’s national side and Belgium, followed by a viewing party to watch England and Wales clash in the World Cup.

Hanley agrees with his counterparts in Norway and Denmark that having the World Cup is a fantastic opportunity to reach new fans and rugby members.

“We can really show Swedes this a golden game,” he says. This article was produced by The Local and sponsored by Viaplay.