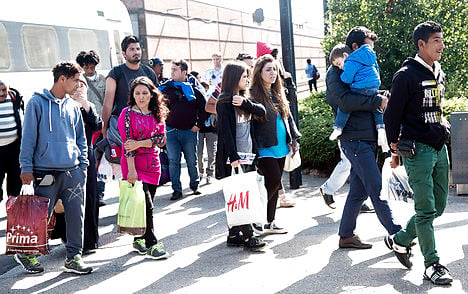 Refugees arriving in the southern Danish town of Padborg on Tuesday were transferred to a local school. Photo: Mikkel Berg Pedersen
European Commission President Jean-Claude Juncker gave an impassioned defence of the European Union and European values in his first annual European State of the Union address on Wednesday.
Speaking in a packed European Parliament in Strasbourg, a forthright Juncker wasted no time in addressing Europe’s refugee crisis, a topic which many had touted would be the focus of the morning’s proceedings.
Calling for solidarity, he said European countries should on a “compulsory basis” resettle 160,000 refugees, confirming a figure that had become public earlier in the week.
“Now is not the time to be frightened, it is time for bold, determined action for the European Union,” he said.
But a EU resettlement of refugees will be without the participation of Denmark, Jakob Ellemann-Jensen, a spokesman for ruling party Venstre, said shortly after Juncker’s address.
“It is obvious that there is a need for joint European solutions and there is a need for a better and wider distribution of these people in Europe. But with that said, Denmark has already taken its share of the responsibility and will continue to do so. Quotas are not something we care for,” Ellemann-Jensen told Jyllands-Posten.
“Of course Denmark should participate in the solution but we have an opt-out [on EU Justice and Home Affairs, ed.], we stand outside of the joint asylum and immigration policies and Danish asylum rules shall continue to be determined in Denmark,” he added.
Ellemann-Jensen said that the government’s opinion on quotas remains “unchanged” and Denmark will not accept “dictated quotas from either Brussels or Stockholm”.
He did, however, open up the possibility that Denmark might volunteer to take additional refugees after EU ministers meet in Brussels on Monday.
“We'll have to look at it on Monday. One expects that there will be a draft of how the distribution should be. And if from the Danish side, we find it reasonable than we can decide how many we wish to take,” Ellemann-Jensen told Politiken.
Denmark's opt-out on EU Justice and Home Affairs makes the Nordic nation exempt from having to participate in a shared European approach to the current refugee crisis, even though joining a EU-wide solution could result in Denmark taking in fewer refugees than it does now.
Denmark will hold a referendum on ending its opt-out on December 3rd, but the new proposed ‘opt-in’ model would have no bearing on Denmark’s asylum and immigration policies.
Prime Minister Lars Løkke Rasmussen earlier in the week said that “the only solution [to the refugee crisis, ed.] is a European solution” and defended Denmark’s asylum policies.
See also: PM: 'The only solution is a European solution'
“We need to help people in need. Denmark does that more than most other countries. Last year, Denmark was the country that took the second-highest number of refugees in comparison to our size,” he said.
In Strasbourg on Wednesday, Juncker reminded listeners that Europe’s history is also a history of immigration, and attempted to put the scale of the current crisis in perspective, noting that the asylum seekers only make up 0.11 percent of the European population. That figure was 25 percent in Lebanon, he added.
Lauding the efforts of ”far poorer” countries like Turkey, Lebanon and Jordan in dealing with the Syrian refugee crisis, Juncker said countries such as Greece, Italy and Hungary “cannot be left alone to cope with the enormous challenge”.
The Commission President also stressed it was unacceptable for countries to accept asylum seekers on the basis of religion — a statement met with applause.
During the speech, Juncker said Europe also needed to create a list of safe countries — chiefly Balkan states — but that his was a “procedural” issue, helping EU countries to prioritize refugees from Syria, rather than overriding the Geneva Convention on refugees.