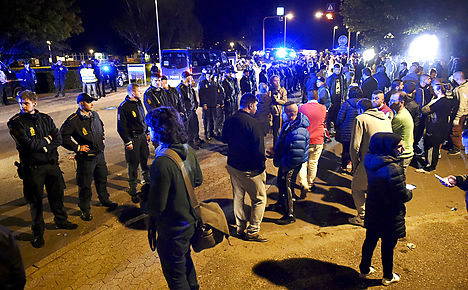 An additional 240 refugees and migrants arrived in Rødby late on Tuesday. Photo: Jens Nørgaard Larsen/Scanpix
Hundreds of refugees who arrived in the port town of Rødby with the intention of travelling on to Sweden are being held by Danish authorities for registration and processing.
Large groups of protestors have gathered outside the school to support the refugees’ goal of getting to the other side of the Øresund Bridge.
“They don’t know where they are or how they are going to get to Sweden,” one volunteer, Denise Persson, who brought clothes and medicine to the school on Tuesday, told Swedish broadcaster SVT.
The refugees are understood to be among around 800 people who got off a ferry from Germany earlier in the week.
An additional 240 refugees and migrants arrived by train aboard a ferry to Rødby shortly before midnight on Tuesday. Many of the arrivals refused to get off the train for more than three hours before police were able to board them on buses.
Those who have expressly sought asylum in Denmark were sent to area centres to be registered while others were directed to the school, SVT reported.
“It is not humane to keep them here. They should know their rights,” said Persson.
While Sweden has become a top EU destination for refugees by issuing permanent residency to all Syrian asylum seekers, Denmark has sought to reduce the influx by issuing temporary residence permits, delaying family reunifications and slashing benefits for newly arrived immigrants.
But on Tuesday Sweden encouraged Denmark to register the refugees.
“Denmark is a rich country and is able to take care of the refugees. According to the existing rules there is also the opportunity for family reunification if the refugee has family in either Denmark or Sweden. How Denmark chooses to interpet the rules is up to Denmark,” Sweden's justice ministry told Danish public broadcaster DR.
Meanwhile Danish Integration Minister Inger Støjberg told Danish television network TV2 she had spoken to Swedish officials about the possibility of a deal that would allow Sweden to receive the refugees. She said that “no agreement” had been reached.
“The Swedes have an understanding for our request to them but their rules mean that the Swedish government can’t just make this sort of decision. That is done by Migrationsverket [the Swedish immigration authorities, ed.]. It would simply require a law change if we were to do something like this,” Støjberg said.
On Tuesday Denmark sent back a first group of refugees who arrived from Germany, with others expected to follow.
“These are people who do not want to seek asylum [in Denmark] and are therefore here illegally. They have been deported and barred from re-entering the country for two years,” police in southern Denmark said in a statement.
“This first group was a score of people. More will follow after their cases are processed,” the statement said.
News of the confusion surrounding refugee arrivals to Denmark came as Sweden's Prime Minister Stefan Löfven met for talks with German Chancellor Angela Merkel.
“We have agreed to continue to push for a reformed European refugee policy. All countries must take full responsibility to help people who have been displaced,” said Löfven.