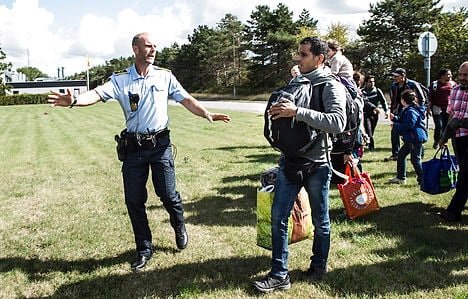 A Danish police officer unsuccessfully tries to stop refugees from leaving Rødby on Monday. Photo: Jens Nørgaard Larsen/Scanpix
An estimated 800-850 refugees and migrants arrived in Denmark during the course of Monday, including the first group to arrive by train in Copenhagen.
A train carrying refugees from the harbour town of Rødby arrived in the Danish capital shortly before midnight on Monday. According to TV2, Copenhagen Police registered 30 individuals, including 28 who are seeking asylum in Denmark.
“On top of that we detained two people for illegal residence when they chose not to seek asylum. They will be transferred to the Danish Immigration Service, which will determine whether they should be deported with an entry ban and taken back to where they came from,” police spokesman Kristian Aaskov told TV2.
In a video shot at Copenhagen Central Station, refugees can be heard saying that they don’t want to be registered in Denmark and would prefer to go to Sweden:
According to South Zealand and Lolland-Falster Police, the location of some 300 of the refugees and migrants who arrived in the past two days is unknown.
“We have heard rumours that there have been many private residents who have driven the foreigners further along. That is maybe what has happened despite our warnings that it is actually illegal,” police spokesman Kim Kliver said.
Police on the island of Lolland shut down a motorway to protect the safety of the large group of refugees who set off toward Sweden by foot on Monday. Swedish officials said over 200 people successfully made it to Malmö, presumably by private vehicle. The motorway was closed at 8pm and reopened after 1am.
See also: Danish police close motorway as refugees march to Sweden
Danish police said the majority of the group attempting to walk to Sweden – a journey that would take around 50 hours and require several water crossings – had been returned to Rødby.
“We have brought the foreigners who were on the roads between Rødby and Sakskøbing back to Rødby, where they are being housed in a school and a sports hall. It has been a very difficult task that we have tried to carry out with as much empathy and professionalism as possible,” Kliver said.
Police at the border between Denmark and Germany also reported that they stopped a group of 20 refugees and transferred them to a school in Padborg.
Prime Minister Lars Løkke Rasmussen said at a Monday press conference that around 400 refugees had entered Denmark over the past 24 hours but doubled that number to 800 a few hours later.
“We cannot just ignore our obligations and send them to Sweden without its consent, because then we would be doing the same as many other countries, which is the reason the European asylum system is under massive pressure,” he said.
While Sweden has become a top EU destination for refugees by issuing permanent residency to all Syrian asylum seekers, Denmark has sought to reduce the influx by issuing temporary residence permits, delaying family reunifications and slashing benefits for newly arrived immigrants.