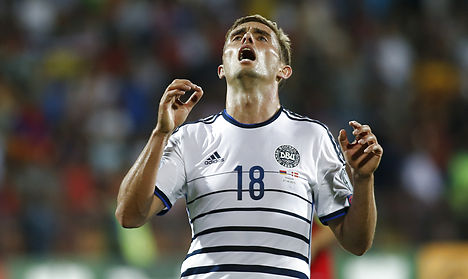 Denmark's Jakob Poulsen reacts after their Euro 2016 group I qualification match against Armenia on Monday. The match ended in a 0-0 draw. Photo: David Mdzinarishvili/Scanpix
The Danish national team has missed its last two opportunities to punch its ticket to Euro 2016. The Danes couldn't beat Armenia on Monday night and had to settle for a scoreless draw.
That marked the club's the second 0-0 draw in a week and has left Denmark with a very complicated path to Euro 2016.
Despite missing the golden chance to qualify directly, Denmark is still ahead of Albania in the standings. It’s a tight difference of only one point, but that could still be enough if Denmark wins its match against Portugal and Albania missteps against Serbia or Armenia.
The October 8th match against Portugal will be decisive for Denmark. Portugal is now leading the group and it won’t be easy for Denmark to get points from Braga Stadium.
Meanwhile, Albania will play at home against Serbia, a match sure to be fraught with tensions due to the drone controversy at their last showdown.
The Court of Arbitration for Sport (CAS) reversed the initial victory of Serbia and awarded Albania with the victory in the drone game. The withdrawal of points left Serbia with no real options to qualify.
Denmark's situation is made even trickier with Albania also still needing to face off against Armenia. The Danes chances for Euro 2016 are conditioned on getting the three points against Portugal and hoping for the best in Albania's matches.