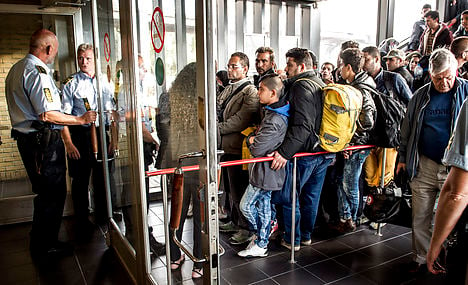 Refugees arrived in Rødby by ferry on Tuesday. Photo: Jens Nørgaard Larsen/Scanpix
“These are people who do not want to seek asylum (in Denmark) and are therefore here illegally. They have been deported and barred from re-entering the country for two years,” police in southern Denmark said in a statement.
“This first group was a score of people. More will follow after their cases are processed,” the statement said, adding that they were sent back by bus.
More than 800 refugees have arrived in Denmark since Sunday, according to Danish officials.
Very few of those have applied for asylum, the Danish Immigration Service (Udlændingestyrelsen) said.
Most of those who arrive in Denmark are passing through en route to Sweden, which is known for its more generous asylum policies.
Swedish officials on Tuesday encouraged Denmark to properly register arriving refugees.
“Denmark is a rich country and is able to take care of the refugees. According to the existing rules there is also the opportunity for family reunification if the refugee has family in either Denmark or Sweden. How Denmark chooses to interpet the rules is up to Denmark,” Sweden's justice ministry told public broadcaster DR.
If the refugees and migrants have not been registered by another EU country before they arrive in Denmark, Danish officials are obligated to register them, even if they would rather seek asylum in Sweden.
While Sweden has become a top EU destination for refugees by issuing permanent residency to all Syrian asylum seekers, Denmark has sought to reduce the influx by issuing temporary residence permits, delaying family reunifications and slashing benefits for newly arrived immigrants.