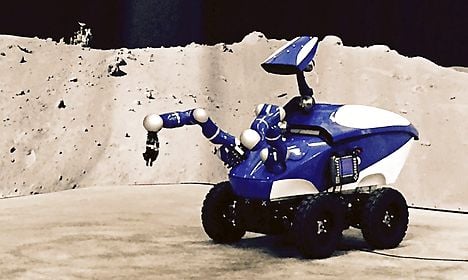 A screen shot taken on Monday shows the Interact Centaur rover remotely guided by astronaut Andreas Mogensen. Photo: Jo Biddle/Scanpix
As part of his ten-day mission to the International Space Station, Danish astronaut Andreas Mogensen performed a breath-taking experiment in which he guided a robot on Earth by feel, placing a peg into a very tight hole on Monday under the careful control of the European Space Agency.
While orbiting some 400 kilometres (250 miles) above Earth, Mogensen took control of the Interact Centaur rover which has a pair of arms for delicate, high-precision work.
The blue-and-white fibreglass robot, which cost less than 200,000 euros ($224,000) to build, also has a camera on its head which allows the controller to directly see the task it is performing.
But sight is not the most important sense in this project. It is touch.
In real-time, thanks to super swift signals bouncing off a dedicated complex system of satellites working in synchronisation, the astronaut manoeuvered the robot into place.
He then very slowly lowered a metal pin held by the robot into a tight hole in a task board with less than a sixth of a millimetre of wriggle room.
Using a joystick
For the first time — thanks to force-feedback technology — when the pin was not aligned correctly Mogensen felt it hit the sides of the hole via the joystick he was operating on the space station.
Cheers erupted when after several long nail-biting minutes the rover — which slightly resembles Disney's WALL.E cartoon character — dropped the pin successfully into place.
Scientists and engineers believe applications of this kind of tactile technology are huge — allowing humans to guide robots in delicate tasks by feeling their way.
The technology will allow people “to project a human-like presence into the robots, to do human-like tasks on the surface” of a planet, Andre Schiele, head of ESA's Telerobotics and Haptics Laboratory, told AFP.
With space engineers hoping at some point to fly people to Mars, “we have to bring them back” which means before they first step foot on the planet “you would have to build an entire launch-platform on the planet.”
Robots like the Centaur — also affectionately dubbed the “blue bug” by some of its designers — could be put in place first to do the building.
“There's going to be a need for a set-up, some building before a human even sets foot on the planet and for that we could send down robots and control them from a space station,” said industrial designer Emiel den Exter.
The 18-month project was a collaboration between the European Space Agency (ESA)and students from Delft University of Technology.
“Even something like lacing your shoe is something you rely entirely on your tactile senses” for, Schiele told journalists gathered at the ESA headquarters in the Dutch town of Noordwijk.
Earthly uses
On Earth this cutting-edge technology known as haptics could also be used “everywhere where you basically don't want to send humans,” said Schiele.
“Feeling” robots would have been useful to cap the 2010 Gulf of Mexico oil spill, or help seal the reactors at Japan's Fukushima nuclear power plant after the 2011 meltdown.
Professor Frans van der Helm, from Delft University's mechanical engineering unit, said one scheme was looking at using  such robots to work in a massive nuclear fusion project in France.
Inside the costly, multipartner International Thermonuclear Experimental Reactor (ITER) — if it is built — “the heat will be about one million degrees,” Van der Helm told AFP.
“So everything starts to deform” making it hard for robots to complete a task which they have been programmed for, he said.
In this case, telepresence technology would allow a human to feel their way through and fix a problem.
For 27-year-old Turkish student Doga Emirdag, who helped design the Centaur's exo-skeleton as part of his masters degree, Monday's demonstration was a big day.
“The robot as it is wouldn't go into space. But the technology being developed will go to space,” he said with a broad smile.