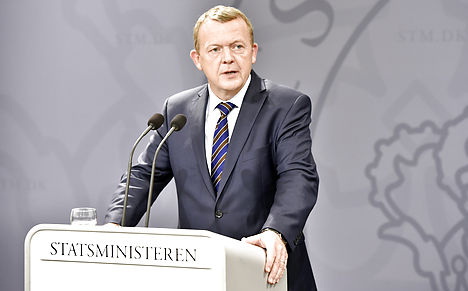 PM Lars Løkke Rasmussen will meet with Denmark's political leaders later on Monday. Photo: Erik Refner/Scanpix
On the same day that a group of refugees refused to be registered in the southern Lolland town of Rødby and Danish advertisements warning would-be migrants about tighter restrictions were published abroad, Danish Prime Minister Lars Løkke Rasmussen said that Europe's asylum system has “collapsed”.
In a Monday afternoon press conference, Rasmussen said that he has been in touch with both German and Swedish authorities in an effort to find a solution to the hundreds of refugees who are currently arriving in Denmark, many with the wish to seek asylum in Denmark’s neighbouring countries.
“We are not a part of the EU’s immigration and asylum policies, but we are a part of Europe. Therefore we need to find a solution that lives up to our standard of human rights,” he said.
See also: Denmark publishes anti-refugee ad campaign
The Danish PM said that Europe is “an extraordinary situation” due to the “double pressure” of economic migrants and refugees from war-torn countries like Syria.
According to Rasmussen, some 400 migrants and refugees have arrived in Denmark within the last 24 hours.
“Over the weekend the situation escalated. The pressure has grown,” he said.
Rasmussen stressed that there “are no easy solutions” but that “the only good solution is a European solution”.
The PM has called Denmark’s political leaders to an emergency meeting later on Monday.
Addressing the group of refugees who earlier on Monday left the southern Danish town of Rødby on foot for Sweden, Rasmussen said letting them simply let them pass through Denmark would be to “disregard our responsibilities”.
See also: Refugees try to walk from Denmark to Sweden
“We can’t just send them to Sweden with Swedish consent,” Rasmussen said, adding that talks with Swedish officials were currently underway.
Rasmussen revealed that he also spoke with German Chancellor Angela Merkel over the weekend and offered to take 100 additional Syrian asylum seekers as “a political gesture”, but those numbers quickly became irrelevant when more than four times that number crossed into Denmark between Sunday and Monday.
Rasmussen said that he would meet with the leaders of the Danish parliament to draft Denmark’s plan of action.
“We need to help people in need. Denmark does that more than most other countries. Last year, Denmark was the country that took the second-highest number of refugees in comparison to our size,” he said.
“Europe is an a very unique situation. Therefore, Denmark is also and that’s why there is a need for careful consideration,” he added.