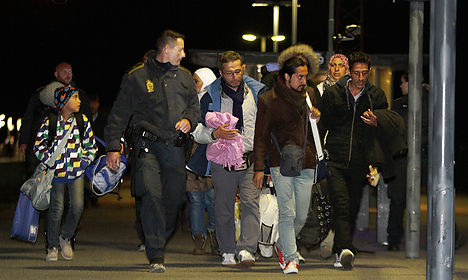 Most of the refugees who arrived at Rødby on Sunday night were from Syria. Photo: Claus Hansen/Scanpix
According to South Zealand and Lolland-Falster Police, a train carrying around 75 refugees from Germany arrived at Rødby Station at 5pm on Sunday. The refugees were given food and drink at the station and were waiting in the arrival hall when another train carrying around 100 more refugees arrived an hour later.
UPDATE: The refugees began walking toward Sweden on Monday
Some time after the arrival of the second train, unrest spread through the station and a majority of the assembled refugees decided to flee through the surrounding fields. TV2 has video footage here.
Police estimate that more than 100 refugees fled the station. By 11pm, police reported that most of them had been found and returned to the station.
“We have found the majority of them and they are in the process of getting registered so that there will be an overview,” police spokesman Kim Kliver told TV 2.
Police did not attempt to stop people from leaving the station.
“We could stop them with force but I don’t believe that there is any place for that. What we need to greet these people with his dialogue and we tried that but they were not receptive,” police spokesman Kim Kliver told public broadcaster DR.
“We will try again to explain to them that they have come to a safe and secure country, where we handle all of these kinds of asylum seekers properly,” he added.
Police said that the majority of the registered refugees are from Syria but there were also Iraqis and Africans among the group.
According to Kliver, many of those who ran from the police had purchased a train ticket to Sweden. Others have opted to seek asylum in Denmark and dozens are expected to be sent from Rødby to Sandholm Accommodation Centre in northern Zealand.
Located on the island of Falster, the port town of Rødby has a ferry connection to Puttgarden in Germany that carry trains between the two countries.