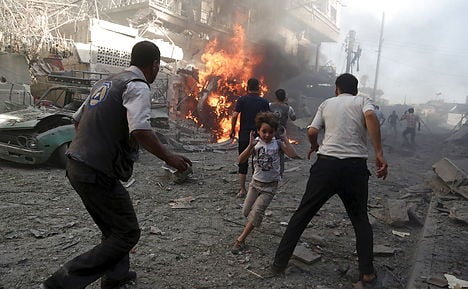 A boy runs from a site hit by what activists said were airstrikes by forces loyal to Syria's President Bashar al-Assad in Damascus on August 24. Photo: Bassam Khabieh/Scanpix
Foreign Minister Kristian Jensen said on Sunday that Denmark will distribute 70 million kroner ($10.5 million) in humanitarian aid to internally displaced Syrians and those who have fled to surrounding countries.
Thirty million kroner will go to the United Nations’ World Food Programme (WFP), which is delivering food to some 4.2 million internally displaced Syrians. According to the ministry, the WFP’s initiative to provide food to Syrians driven from their homes due to the country’s ongoing civil war is severely under funded.
“The UN needs money and has cut food rations to the many millions of internally displaced Syrians and has cut help to the surrounding countries. Therefore, the main portion of our funds will go to food,” Jensen said.
The WFP has had to cut its financial support support to Syrian refugees in Jordan, Lebanon and Iraq to the point where each refugee is given just 60 to 90 kroner per month.
“There is no doubt that the desperate situation combined with the lack of food and other basic necessities is causing more and more Syrians to flee toward Europe. Therefore we need to send more money to the international emergency aid organizations,” Jensen said.
The foreign minister said that other countries should follow suit.
“I sent this message on to my European colleagues at a Saturday meeting in Luxembourg. All countries, including the wealthy Gulf states, must take greater responsibility for this humanitarian tragedy,” he said.
According to the United Nations, nearly half of Syria’s population has either been internally displaced or have left the country.
Although nearly 10 million Syrians have been driven from their homes and tens of thousands have risked life and limb to reach Europe, Persian Gulf countries like the United Arab Emirates, Saudi Arabia, Kuwait and Qatar have not offered to resettle any of them.
In addition to the 30 million kroner going to the WFP, Denmark is also donating 25 million kroner to the United Nations Refugee Agency and 15 million to the International Committee of the Red Cross.
At an international donor conference for Syria held in April, Denmark pledged to donate 250 million kroner throughout 2015 to the victims of Syria's civil war. Denmark has given well over one billion kroner to Syria since the conflict began in 2011.