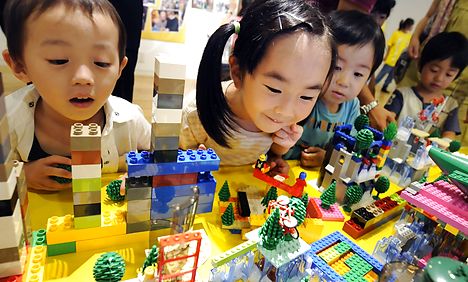 Lego's revenue rose by 18 percent. Photo: KAZUHIRO NOGI/Scanpix
The world's largest toy maker Lego on Wednesday reported a jump in first half profit and sales, underpinned by strong growth in Asia.
Revenue increased 23 percent to 14.1 billion kroner (1.89 billion euros, $2.13 billion), putting the Danish group ahead of its US-based rivals Mattel — maker of Barbie — and Hasbro, whose products include the Transformers toy line.
Stripping out the effects of a strong US dollar, revenue rose 18 percent. Net profit grew 31 percent to 3.55 billion kroner, making it more profitable than its two competitors.
The result was “especially encouraging since we compare [it] to 2014 when The Lego Movie products boosted our performance,” chief executive officer Jørgen Vig Knudstorp said in a statement.
The company's first half results were released on the same day that astronaut Andreas Mogensen took a set of custom-made Lego sets with him as he became the first Dane in space.
The Lego City, Technic and Star Wars lines were among the most popular, while new launches such as Jurassic World and the girl-focused Lego Elves “were received very positively,” the company said.
The group will open its first Asian factory, which will initially only package products made elsewhere, in Jiaxing near Shanghai by the end of the year.
“While all our regions experienced double-digit growth during the first half of 2015, it is particularly satisfactory that Asia saw the highest growth rates given the considerable investments we are making there,” chief commercial officer Loren Shuster said.
The colourful bricks are currently produced at the group's headquarters in the Danish town of Billund, and at newer plants in the Czech Republic, Hungary and Mexico.
Lego has outpaced the rest of the toy industry for several years, defying the rising popularity of mobile phones and tablets.
See also: Lego looking for alternative to plastic
In June, it announced an investment of one billion kroner into research to replace the oil-based plastic in its products.
The privately owned company was founded in 1932 by carpenter Ole Kirk Kristiansen, who in 1934 gave it its current name, an abbreviation of the Danish words “leg godt”, meaning “play well.”
His grandson, former chief executive Kjeld Kirk Kristiansen, is ranked the world's 129th richest man according to Forbes magazine, with an estimated fortune of $9.4 billion.