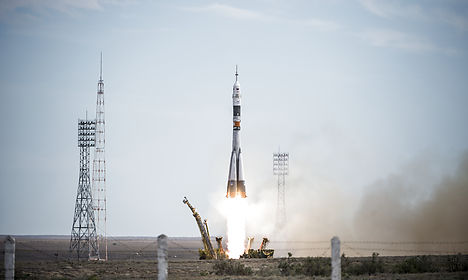 Mogensen's blast-off went as planned Wednesday morning. Photo: Asger Ladefoged/Scanpix
The Soyuz spacecraft carrying Danish astronaut Andreas Mogensen successfully launched towards the International Space Station (ISS) in the early hours of Wednesday.
The spacecraft blasted off on schedule from Russia's Baikonur cosmodrome in the Kazakh steppe at 6.37am Danish time. Along with Mogensen were cosmonauts Sergei Volkov of Russia and Aidyn Aimbetov from Kazakhstan.
“The crew is doing well, every thing is in order on board,” said Mission Control at Baikonur.
The spacecraft is expected to reach the ISS in two days' time, docking on Friday. The mission is scheduled to return to Earth on September 12th.
Mogensen is the first Dane to enter space while Aimbetov, who replaced British singer Sarah Brightman after she pulled out of the mission in June, is the third from his country to do so.
“It's a great honour for me to represent Denmark as an astronaut,” Mogensen said last month.
Mogensen, 38, will be joined by 26 custom-made Lego models provided especially for the mission by the world-famous Danish toy manufacturer, as well as the writing of Danish philosopher Søren Kierkegaard.
Aimbetov, 43, took dried horse milk and several other national staples from the Central Asian country into space with him as well as a toy from his daughter, who said she hoped he would encounter alien life.
The take-off also marked the 500th launch from the Gagarin launchpad, named after the Soviet space pioneer.
You can see the launch below and can find much more on Denmark's first astronaut here.
Mogensen's final approach to the spacecraft, courtesy of public broadcaster DR: