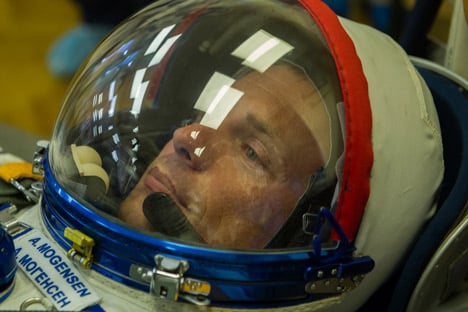 Andreas Mogensen: the first Dane in space. Photo: European Space Agency
Andreas Mogensen is just hours away from fulfilling a childhood dream and carrying the pride of a nation with him into outer space.
The 38-year-old astronaut is currently in Kazakhstan, preparing to leave Earth early Wednesday morning Danish time as part of an international crew travelling to the International Space Station (ISS).
Mogensen’s 10-day mission will include testing the European Space Agency’s (ESA) new Skinsuit, which is designed to minimize the negative effects of weightlessness on the body. He will also carry out around 20 other research projects and will launch two small satellites created by Aalborg University to monitor ship traffic in the Arctic.
Joining Mogensen on the the Soyuz TMA-18M spacecraft will be Kazakhstan's cosmonaut Aydyn Aimbetov and Russian cosmonaut Sergei Volkov.

The trio is expected to take over 50 hours to get to the ISS, first circling Earth more than 30 times.
In the run-up to liftoff, Mogensen has been hailed as a national hero for his unique role as the first Dane in space.
The Copenhagen native was educated at the Copenhagen International School before receiving a Master’s in aeronautical engineering at Imperial College London. From there, he went on to the University of Texas to receive a doctorate in aerospace engineering.
In 2009, he was selected as an ESA astronaut. Since then, he has been gone through training missions that have taken him to all corners of the Earth. Those missions intensified when he was assigned his ten-day ISS mission in August 2013.
Despite the years of preparation, Mogensen said in an ESA video posted last week that nothing can really prepare someone for a space mission.
“It’s very difficult for me to imagine what it’s actually going to be like once I get launched into space. I have a real difficulty imagining that, because it is such a unique experience,” he said in a Google Hangout.
Mogensen and his wife Cecilie have a daughter, Emily, who will turn two shortly after he returns from his ten-day mission.
Speaking to the Danish science site Videnskab.dk, Mogensen said that although he recognizes the dangers of his mission, he is confident he will return safely to his family.
“I estimate that the risk is maybe one or two percent that something will go catastrophically wrong. There are risks when you put yourself on-board a rocket, but the Soyuz is generally very robust and dependable, so I don’t anticipate anything happening,” he said.
Mogensen’s ten days in space will be busy. According to the ESA, Mogensen will carry out 50 hours of research at the ISS, whereas astronauts normally do about 80 hours of work over a six-month mission.
The spacecraft carrying Mogensen is scheduled to lift off at 6.37am Danish time. Various locations across Denmark will be offering special screenings of the launch and Danish broadcasters DR and TV2 will be providing live online coverage beginning at 5.30am.
The ESA will also be live streaming the launch, which can be viewed below beginning at 5.30am on Wednesday: