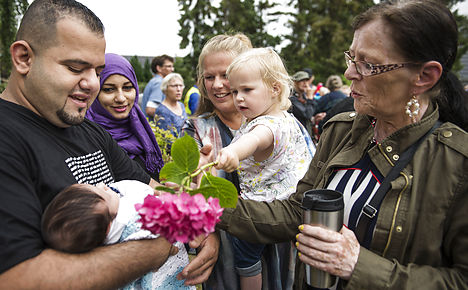 Organizers said they wanted to counter the vandal's message of hate. Photo: Bo Amstrup/Scanpix
One 26-year-old vandal might have wanted to scare the residents of the Lyngbygård asylum centre in eastern Jutland, but hundreds of other Danes want the asylum seekers to feel safe and welcome in Denmark.
The 26-year-old man is suspected of setting fire to a minibus used by the centre and painting a swastika, the initials of a far-right nationalist movement and the words ‘first warning’ on the centre’s garage.
See also: Man jailed for Danish asylum centre arson
On Sunday, the local community came out in large numbers to show the asylum seekers that the vandal did not represent the majority of Danes. An estimated 1,500 to 2,000 people participated in a sympathy demonstration dubbed a ‘joy ring’ around the centre. Among the participants were priests from several area parishes. Area residents and priests from several nearby parishes created a human 'joy ring' around the centre. Photo: Bo Amstrup/Scanpix
“One of the most important things is to bring a good atmosphere back to Lyngbygård. It’s been really stressful out here,” Ina Dulanjani Dygaard, one of the organizers behind Sunday’s event, told Ritzau news agency.
“The residents are scared – some of them are scared for their lives,” she added.
Another organizer, Jette Aarøe Clausen, said it was important to counter the vandal’s hateful actions.
“The message the perpetrator tried to send was that asylum seekers aren’t wanted here. The counter message we wish to send today is that we want to be a land in which there is room for refugees,” she said.
Thursday’s fire and vandalism at the centre marked the third time it had been targeted in recent months.
The suspect in the case was arrested late on Thursday and made an initial court appearance on Monday in which it was determined that he would be held on remand for the next four weeks.
According to public broadcaster DR, the man is a known figure in the Danish far-right who has expressed anti-refugee sentiment on Facebook.